Warner Bros’. The Suicide Squad lands in theaters and on HBO Max on Aug. 6 and is poised to up the ante on its 2016 predecessor, Suicide Squad. We joined the sequel’s cast and filmmaker James Gunn at a recent press conference and picked out 5 of the most interesting facts about the upcoming sequel set in the DCEU (DC Extended Universe).

The Suicide Squad marks Margot Robbie‘s 3rd trip playing eccentric villain-turned-(anti)hero Harley Quinn. But this time around Harley is finally free of her psychotic, green-haired lover, Joker and his toxic influence – and loving it.

“I loved getting to play Harley who is in the mindset of like ‘single and ready to mingle,’” said Robbie. “I haven’t played that version of Harley before. She’s always been very committed to Mr. J or just fresh out of the breakup with Mr. J.”

But while Harley enjoys getting to rediscover herself in the film, that doesn’t mean that she’s completely sworn off romance. Speaking on how Harley’s interactions with potential suitors influences the film, Robbie said, “James put in a lot of very funny potential love interests throughout the film. It doesn’t always end well, obviously.”

We’re guessing there won’t be any wedding bells by the end credits.

Obscurity is the New Fame

If you thought writer/director James Gunn‘s knack for turning obscure comic book characters into franchise film stars was limited to the Marvel Cinematic Universe, you’re sorely mistaken. Not only has Gunn created a story sure to elevate some of DC’s B-List characters to the forefront, he’s done it with deliberate intention.

“I selected them all in very different ways,” said Gunn. “I knew the kind of story I needed to tell and there were some characters like, you know, Harley, who I wanted to put in the movie and Boomer (Captain Boomerang). Then there were other characters like Polka-Dot Man, and I really wanted to use a character that was thought of as a lame supervillain.”

And believe it or not, even James Gunn does his research the same as the rest of us.

“I literally put into Google ‘Who is the dumbest super villain of all time?’ and Polka-Dot Man always came up near the top,” said Gunn. “Being able to take a character like that and give him heart was fun for me. And I love rats, so Ratcatcher was an easy one.”

One of the driving forces in The Suicide Squad is the rivalry between contract killer Bloodsport (Idris Elba) and Peacemaker (John Cena). According to both actors, that rivalry is a foundational aspect of the upcoming film and drives much of the story this time around.

“It was a really great experience to explore, if I’m honest,” said Idris Elba. “When you read the script, you sort of see the natural rivalry between John and I, and James, and the natural dynamics of the whole team. John and I really sort of gravitated to this natural dick swinging competition, that was just a lot of fun.”

“I’ll say the same,” agreed Cena. “I think if you look at the personalities we have here, James has cast a really wide net and on top of that, given everyone superhero personalities that are distinctly definable, except Bloodsport and Peacemaker. They’re of the same skillset. And I think that really starts the fuel for the one-upmanship. They really want to battle for that Alpha position.”

Like most of the entertainment industry (and aunties everywhere), James Gunn knew he wanted to work with British heartthrob Idris Elba. He’s a respected actor with a swagger that high-action films like The Suicide Squad rely on to attract audiences. But finding the right role for Elba would prove trickier than expected.

“I wrote Bloodsport for Idris,” said Gunn. “I wanted him to star in this movie, so it wasn’t a matter so much of who the character was, it was, ‘Let’s find a character that’s obscure and build as our own cinematic creation for Idris.”

“The first conversations were about me playing Rat Catcher,” added Elba. “That was a very short conversation. We moved on very quickly.”

Possibly the most random thing we learned was not only does John Cena rock white cotton briefs (aka “tighty whities”) in at least one scene, he’s apparently blessed below the border.

“Yo bro, your dick is huge!” said Saturday Night Live comedian Pete Davidson, who plays Blackguard in the film. “I saw a screening of the movie, you have a huge piece, dude. Co-star Michael Rooker agreed. “That wasn’t even a penis – that was a LOG!”

Cena jokingly agreed with the love his appendage received. “I’m just happy that with a group of so many talented characters, actors, and professionals – we just spent a good solid minute or more talking about my dick.” 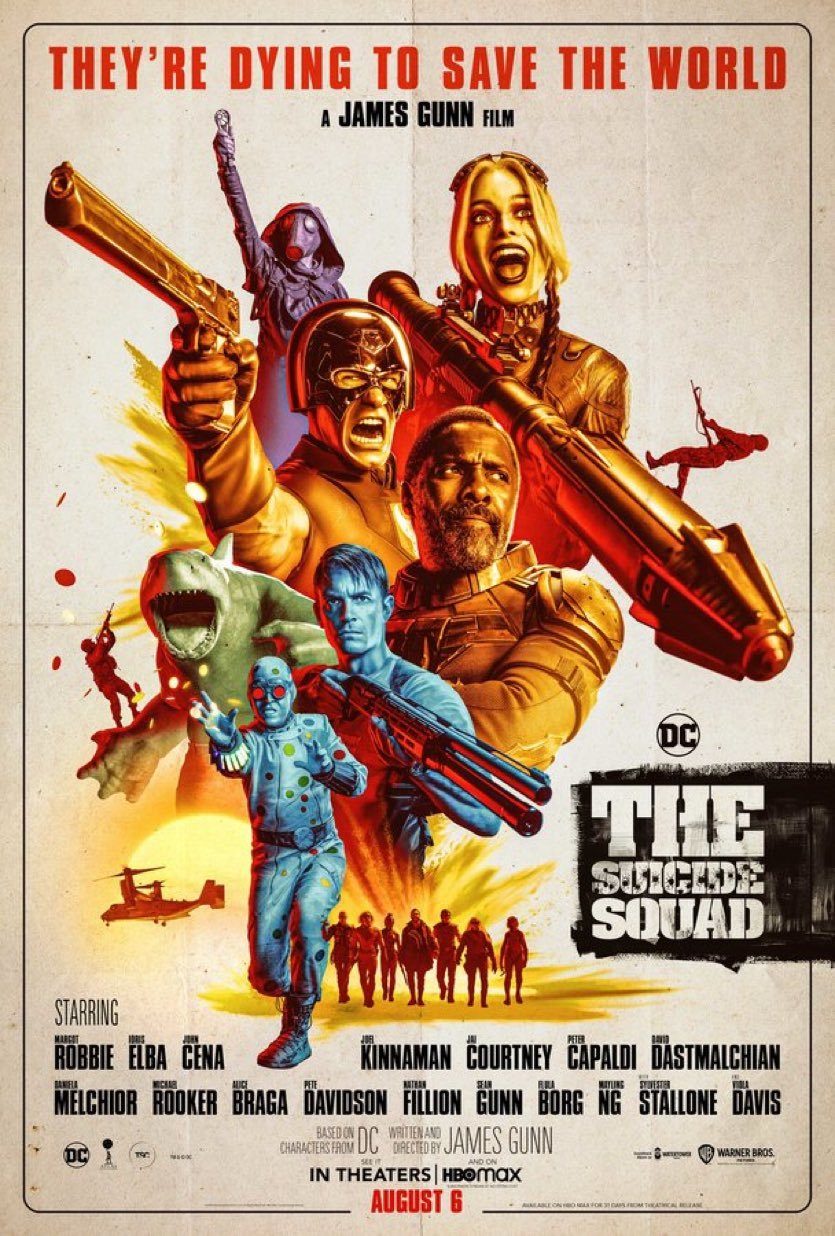