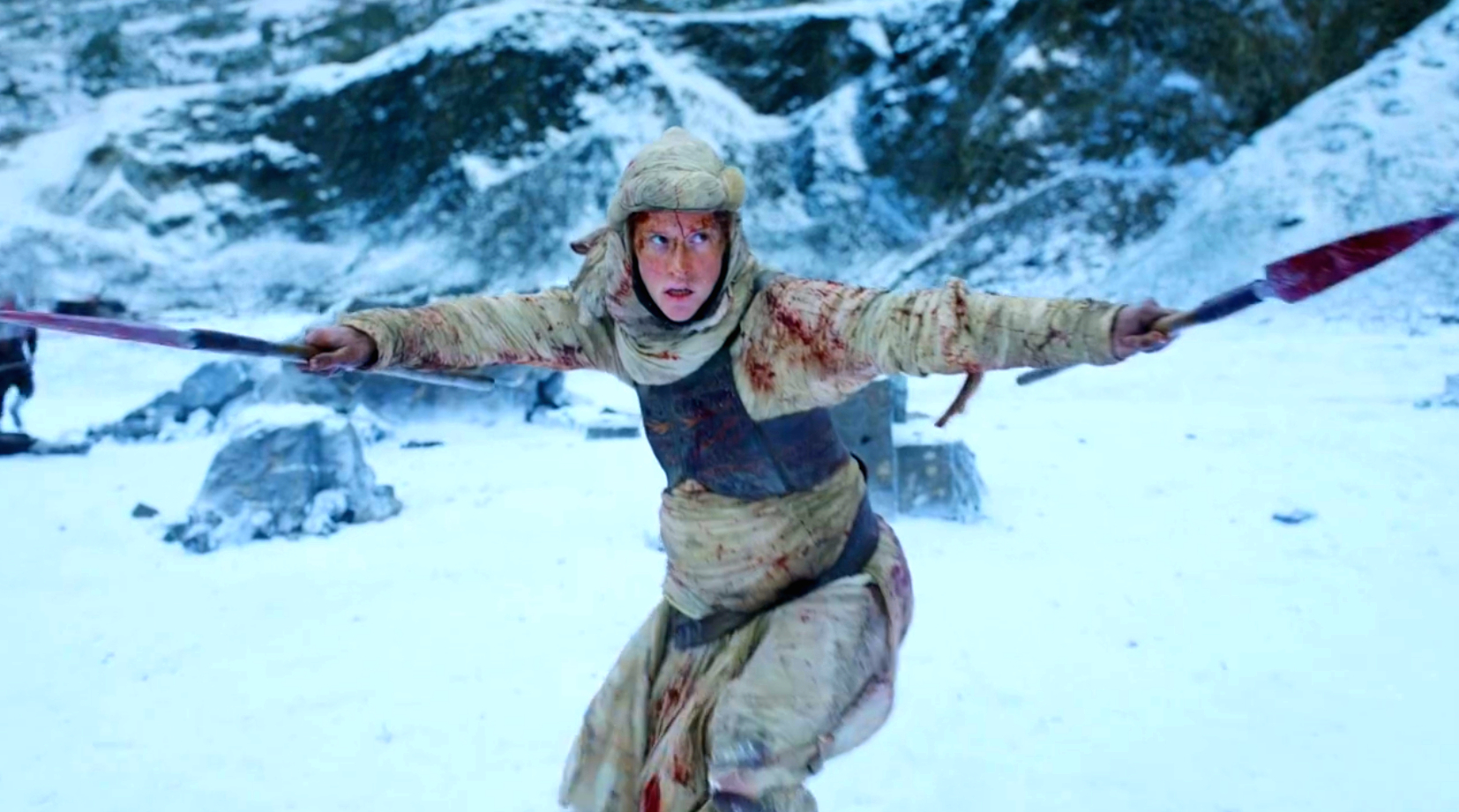 ‘Wheel of Time’ Recap: Episode 7 “The Dark Along the Ways”

Quote of the Episode: “Before you I had nothing to live for…nothing to die for, you have given me both.”

At the end of episode 6, I had started to lose a bit of faith in the direction of the show. I hadn’t joined the Bookcloaks yet, but there were parts that had me questioning the direction we were going. I ended the last review by saying, “I’m concerned about how they plan on landing this plane. The show has struck a flock of birds, lost power to an engine, and I’m looking down at the Hudson River and hoping that Captain Sully is behind the controls.”

Well, ladies and gentlemen, this is your captain speaking! Sully is in the house! One of my consistent hopes and critiques for Wheel of Time has been that it needs strong anchors to keep my fellow BookWyrms from succumbing to the “Bleakness.”  The opening scene of Wheel of Time episode 7 anchored us in snug and tight!

REMINDER: Spoilers are oathbreakers and I am a wetlander who became a member of Far Dareis Mai, dancing on the slopes of Dragonmount.

That’s it. That’s the list. No Sir Arthur Dayne, no Steve Rodgers, no Aragorn or Logan Nine-fingers. Momma Dragon got busy in Wheel of Time episode 7! I was talking to a friend, and he said it was the first time he’s ever seen a pregnant woman give out a cesarean. Bruh! I watched and re-watched this at least 16 times. In fact, I’m about to pause this review and make it 17…brb. This whole scene made me drool for the prospect of seeing the Aiel get busy en masse. I can’t wait to see the rest of them unleashed on the WetLands. As a head’s up, I told you all back in 2020 on my Best Fantasy Momma List that Momma Dragon was going to be a problem. Next time, just listen and you won’t be surprised.

Anyway, Momma Dragon finds her way up the slope of Dragon Mount, and we already see that she’s put in work. She looks like she’s been running the most dangerous version of Oklahoma Drills ever. Her entire outfit is covered in blood and dirt, and she’s dodging explosions and simultaneously going through labor pains. I don’t know how long she was pledging Maiden of the Spear, but she knew “Invictus” because that whole scene had her head “…bloody but yet unbowed.” The first guy Momma Dragon unalived needed to talk to Edna, because he clearly didn’t know about the “No Capes” rule.  For future reference, when the mother of a prophesied savior is trying to give birth to that savior, on a mountain…just let her be man. Let her curl up against a rock and give birth to the chosen one, because once you disturb her you got to immediately “Protect ya Neck,” and since we know there’s no Wu-Tang in the Wheel of Time, the odds of successfully doing so are not in your favor.

SIDE QUEST: Let’s quickly talk about the He-Man Woman’s Haters Club that is popping up amongst some of the incels pretending to be Wheel of Time fans. The ones who are like, “THERES NO WAY A WOMAN COULD DEFEAT ARMORED MEN…blah blah blah.” Listen. Mama Dragon became a Far Dareis Mai in less than a years’ time. And if you’re a fan of the book you know the Maidens aren’t just giving out spears all willy-nilly as participation trophies. No honorary memberships in the Maidens. You pledge, you go through hell week, you have your probate show, and then you start giving out “L’s.” So the fact that Momma Dragon learned the ropes so fast speaks to the fact that she was: #1, a problem, and #2 highly motivated to become a problem quickly. Additionally, all you need to do is google MMA woman taps out marine to see how a smaller woman can utterly demolish a trained killer. So, if you’re really telling me that a special forces navy seal (which is what the Maidens are,) couldn’t take out a few Star Trek red shirts, just because those red shirts happen to be men, you’ve already let the bleakness take you, and you’ve got no business watching the rest of the series.

Back to the show, the EF5 have just left Mat, or Mat has ditched them, and they are wandering The Ways. The Ways are sufficiently creepy and simultaneously sketchy, and I’m loving how it’s portrayed. We see the relationship between Lan and Nynaeve still evolving, and we get a peek of Perrin’s abilities starting to seep through. While making their way through a trollock finds them, forcing Egwene to channel, and wake up Machin Shin. Machin Shin starts impersonating that one toxic parent and begins whispering all sorts of doubts and fears into everyone’s mind. But the Black Wind made a mistake. Machin Shin should of offered compliments to Nynaeve but instead it pissed her off. That’s rookie move kid. Zoë Robins once again shows why she is the GOAT casting choice for Nynaeve and holds back Machin Shin on pure will and rage. Moraine opens The Ways in the nick of time, and everyone rushes through to Fal Dara.

Alright, we see the Squad entering Fal Dara, and it looks like Padan Fain is hot on their trail. The Squad enters Fal Dara, and we get our first look at fan favorite Uno. We can now officially start the Uno Swear words count. We get a quick scene with Lord Agelmar, and the most interesting thing was that we hear Lan referred to as Dai Shan twice, letting us know that Lan has some titles we don’t know about. We also see Moraine putting the Red Ajah on the heels of Mat, and I’m not quite sure why.

Time for a scene switch, because we haven’t been in a bar for a while. In Wheel of Time episode 7, we get our introduction to Min; a different city, different place than in the books, but it’s still our Min. I really like how they showed us Min’s visions. I’m looking forward to seeing more of them in the future. Moraine tells the EF5 about Min’s visions, and then explains the worst field trip ever. Basically, she’s dragging everyone to the Eye of the World to confront the Dark One, but only one person will live and then she leaves to let the EF5 discuss their “options”. The rest of the scene is hella messy. It felt very telenovela, and I’m not sure if it really added anything.

Lan heads out to see his family after Moraine lets him know she approves of Nynaeve. Nynaeve tracks Lan to Zahir’s house, and we get more of Lan’s backstory. We find out that Lan is actually the last king of the Malkier, and Nynaeve makes a power move with 6 small words…“Do you want me to go?” Lan proves he is a smart man and says absolutely nothing.

We switch over to Rand who is desperately trying to find the flame and the void, while Egwene finds him. This whole scene with Rand hit’s differently once you watched the whole episode. He seems less angry, more sad, more unsure than anything. When he says, “I don’t want to lose you”, it’s not Rand worried about Egwene, because at this point he knows. He’s worried about his own death, he’s worried he’s going to die tomorrow, and he’s worried he’s never going to see Egwene again. When Rand tells Egwene he’s going to be her warder, it seems like he’s trying to convince himself. The last part of the scene when Egwene tells Rand, “I’ll stand by you no matter what happens, no matter what comes”. I think that was the last thing Rand needed to hear before coming to terms with the fact that he’s the Dragon Reborn. He needed to hear the woman he loved tell him: he wasn’t a freak, a demon, a madman or a darkfriend touched by the taint. Egwene anchored him, letting Rand know, that no matter what, you’re still my sheep herder from the Two Rivers.

Rand finally comes to terms with the truth. We see a flashback to Tam telling Rand about his Navy Seal momma. Then, we get a series of flashbacks; Rand using the one power to break down the ironwood door, Rand recognizing Dragon Mount, Rand channeling to save Egwene on the bridge in The Ways, and Machin Shin dry snitching and telling Rand all the news. Rand then goes to Min and gets confirmation as she tells him about her first vision of his birth. They chat a bit more. The conversation ends with Rand asking Min what else did she see, and Min answers, “Rainbows and Carnivals and 3 beautiful women.” That sound you heard was me and the rest of the Bookwyrms letting out a nice chuckle.

We end Wheel of Time episode 7 with everyone apologizing and deciding to go to the Eye of the World to get unalived together. Lan rushes in the room to tell them that Moraine has masked the warder bond, and she’s rolled out already with Rand in tow. We get a nice overhead shot of what looks to be the creepiest version of the 100-Acre Wood ever, and we are now in the countdown to the season finale. Will the rest of the squad try and follow them? Will Rand make it back alive? What’s Padan Fain doing? Will a wall finally fall on Mat? I don’t know. You don’t know. I guess it’s time to roll the dice and find out.