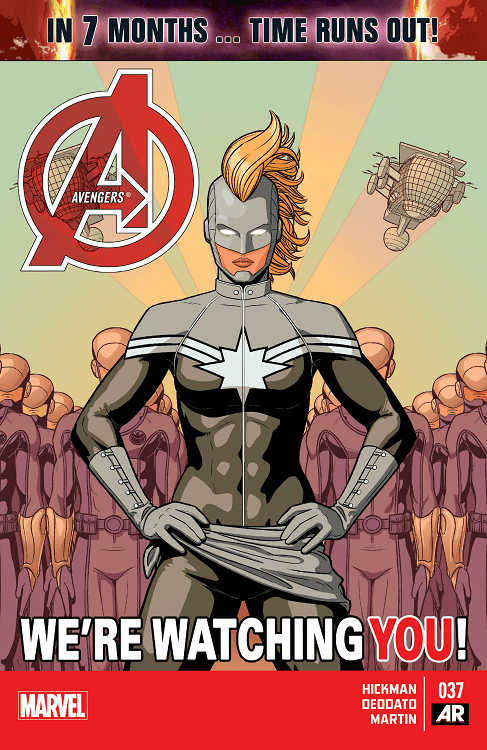 I was (pleasantly) surprised when I picked up this week’s Avengers and realized that Hickman had gone back to the S.H.I.E.L.D. chasing after the Illuminati storyline as I thought that the New Avengers book would do the heavy lifting for that. After last issue’s focus on Bobby Da Costa and A.I.M., I figured that the Avengers book would follow that conflict, but Hickman is juggling a lot here and might I say, very well. Avengers #37 is actually more of a sequel to New Avengers #25 while explaining more of the context ofNew Avengers #24. I’m confident you got all of that just now. Basically, I’ve spent a paragraph being facetious about the chronological order and meshing of two different books, but I really want to say is that I enjoyed this issue a lot.

S.H.I.E.L.D. is still hunting down the Illuminati, tracking the very signal that Reed knew they would use when T’Challa jumped to their location in the previous New Avengers books. The highlight here is the growing frustration and disdain of Steve Rogers in their pursuit. The former Captain America has never been short on passion, but the endless chase and mocking of the Illuminati has really left him at the end of his patience. He doesn’t even want them called by their “hero names” anymore. Things are pretty bad.

Also nice, is the actual showcasing of how the Cabal came to be empowered by the world’s authority and the case that was made to destroy Wakanda with the United Nation’s blessing. While it didn’t lack for clarity when it was introduced in New Avengers #24, the expanded context and perspective from Rogers and Sue Richards helps to frame this as the big deal that it is.

Avengers this issue focuses on the newly formed S.H.I.E.L.D. team still hunting for the Illuminati featuring some new intriguing concerning Sue Richards and the draining patience of Steve Rogers. Hickman has spun a mighty web with all the parallel storylines and connecting points to pull off a nice “show your cards” issue that both gives background context and advances the plot.