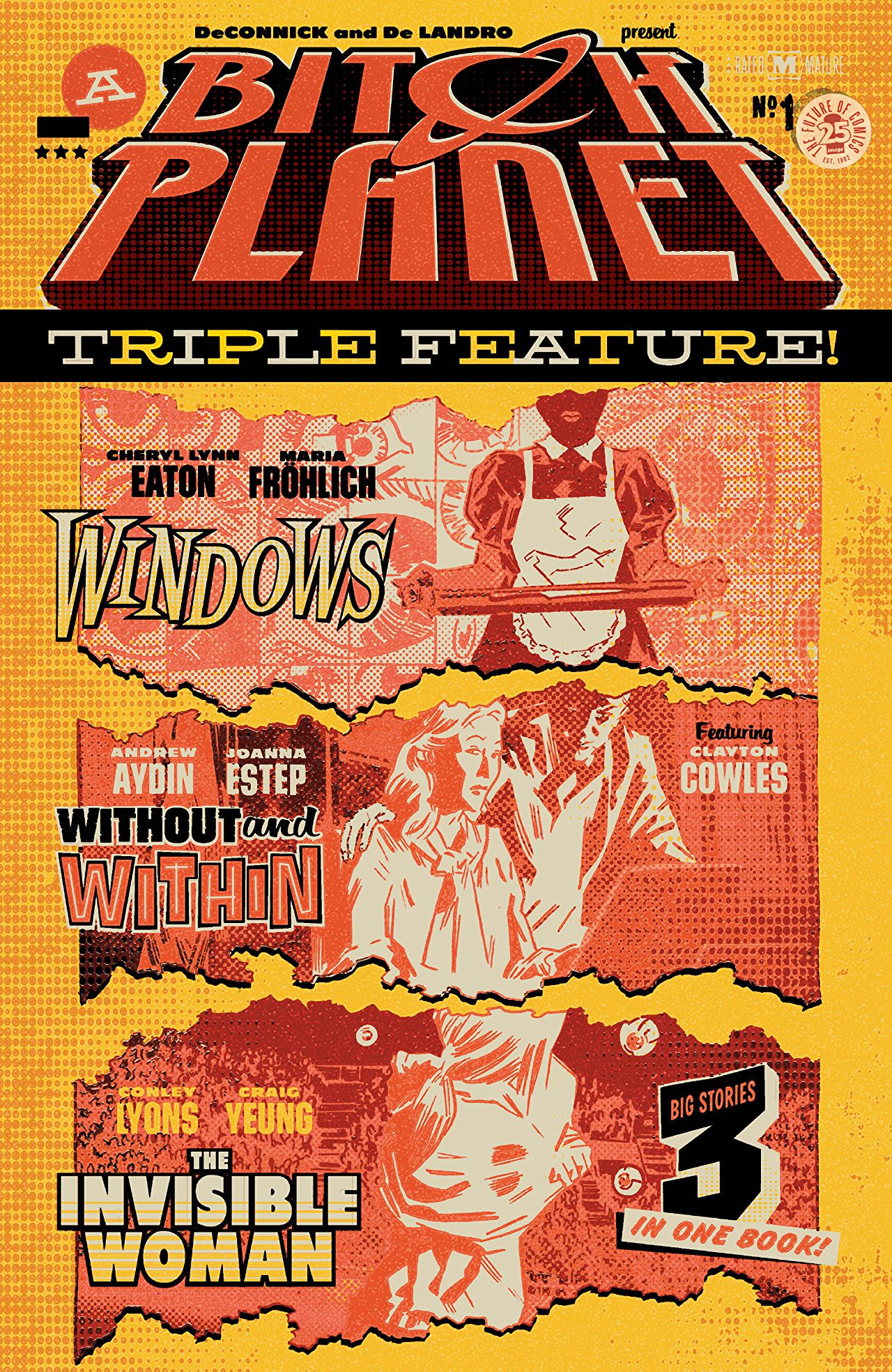 To be honest, I wasn’t exactly sure to what to expect from Bitch Planet’s Triple Feature. Not that I assumed it would be awful or a waste of money. I knew that this comic was an offering of three different stories by different creative teams set in the universe of Bitch Planet and obviously inspired by the comic that we’ve come to love. I was not expecting to be reading and just be stunned by how familiar these stories felt; how in tuned theses shorts were to what makes Bitch Planet, well, Bitch Planet. If Kelly and Valentine gave their blessing and passed the baton, these folks picked it up and ran to emulate FloJo with it.

Windows is the first comic short, at the center of it is Lupe, trained as a medic and in service to the fathers; she’s stationed at Bitch Planet and the first pages open to her and her team responding to an unruly inmate. With the exception of Whitney, we haven’t seen more women at the prison colony working if you don’t count the inmates and the ugh, hologram guides. Interesting still, Lupe is a woman of color. Lupe is talked over and her authority is questioned and then overruled by the other members of her team and it’s not a unfamiliar sight in the sense of this is something that happens often to women in the workplace. 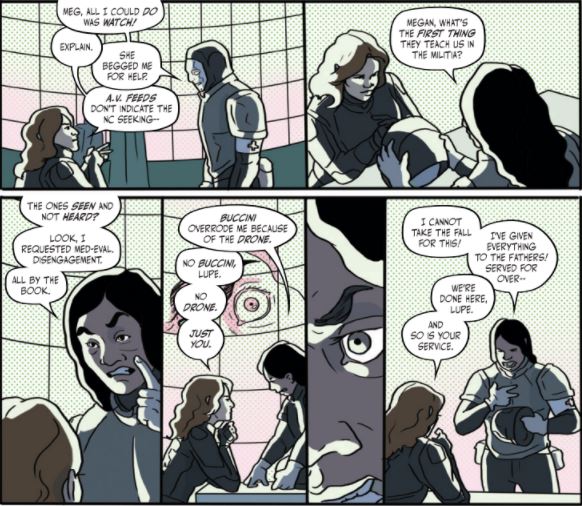 This short features perhaps the most physical violence and it’s a bit jarring but it’s not super explicit to where a trigger warning might be needed. An Inmate has been subdued and there’s additional unnecessary force used against her. Lupe, who , attempted to step in and do her job, is forced to take the blame for this now unfortunate incident. Her record is now blemished, marred. The artwork is muted color wise with the exceptions of the red of the prison jumpsuits and pink, a color you must follow closely throughout the pages. Window leaves a rather grand first impression as the first entry touching upon communication and empathy –of being a cog in a wheel of suffering and also seeing yourself as apart of a system that doesn’t work and choosing to open your eyes and acknowledge it. Superb.

An fellow Bitch Planet fan told me that this short was a much duller entry in this offering and I had to disagree. I had to disagree on the grounds that while the setting of this story doesn’t take place in the prison or even around many women, it is a valid piece of social commentary. It takes place in what looks to be a courthouse, or at least some place where the political happenings are at, a place where big things happen for sure. The absence of women isn’t a big deal because look–how many time have we cut to pages of the men at top reading issues of BP and it’s simply panels of them calling the shots, delivering verdicts affecting many or getting themselves a drink? 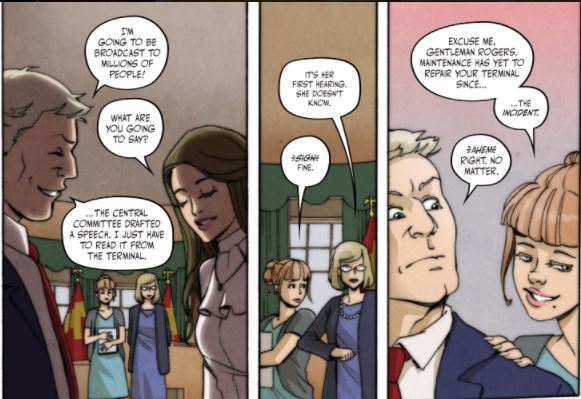 For that reason, I think of that it is expertly placed as the second and middle story in this issue: what happens outside the prison colony when we’re not with Kam and the crew? These speeches from these men who call the shots in a world where womenfolk can be labeled non-compliant and sent away–what do their lives look like? Also it eerily made me think of this photo note it’s an overwhelming presence of non white folks and not enough women. *Thinks back to that photo* Anna the new young, hire who has moved up from the administrative office, is here for her first day to perform her duties, the older women remark on how she’s new and ill prepared. Ill prepared for what though?

Again it’s yet another familiar scene for women in the workplace when unwanted attention and gestures encroach on our professionalism. It’s a comic that speaks to the old boys club that’s set in motion that is detrimental to women and makes them seek out safe places in the workplace. The art is handled well enough with great paneling to show both levels of action: what’s happening inside the room where the speeches get said and of course what Ann is enduring behind the scenes.

YOOOOOOOOOOOOOOOOOOOOOOOOOOOOO! This is the comic that produced the art that was crafted into lovely avatars and even gifs in celebration of this issue! (I love these and please believe it I’m been using them with my social media accounts!)

Hopeful. Diligent. Underappreciated more than likely. And Invisible. That’s Leslie, the main character in the last comic of Bitch Planet’s Triple Feature. She represents perhaps a bigger number of women who have a dream, a goal and don’t fit whatever package deal appearance wise, education wise or whatever in the eyes of her supervisors, coworkers, etc. She constantly disrespected by her male colleagues and her special nickname by them seems to be “Tit-less”. Great. Again, and I know it’s satire but third times the charm: art imitates real life, folks. 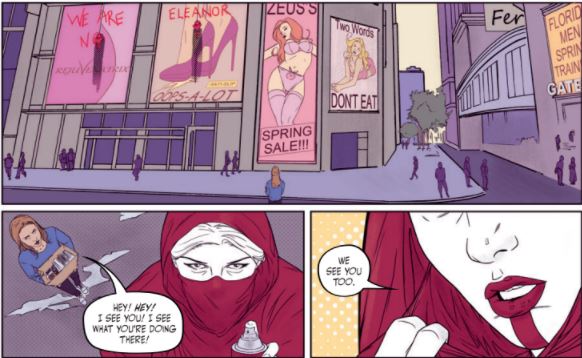 The artwork has some big, expressive moments to maximize the impact of certain scenes: like when Leslie’s new hairdo is revealed at the hair salon, you just know that her new do’ that going to help her get that promotion at work. The panels of some of her bigger confrontations at work are good examples as well. Can’t downplay the beauty of D’Alfonso’s coloring job here as it syncs with the artwork in a way to really make the colors pop and make you pay attention! In the end Leslie’s own personal demonstration is one that mirrors real life ones by women in real places around the world. The Invisible Woman serves as an excellent critique in the format of a comic that addresses the ways women are seen–who they are invisible to and who they aren’t; and how that makes a hell of a difference in what a woman puts her mind to do after she finally figures out the two.

Hold the phone: Clayton Cowles! Cowles’ work doing the lettering is never not appreciated or goes unnoticed. Each comic featured stories that took place in the workplace which is very important. Why? Much of our lives take place at work, believe it or not. And it would disingenuous to not have any representation of women doing just that. Also? I won’t spoil it but go back and pay attention to all the other female characters in the stories: would you label them as non-compliant? As women just trying to get by, just trying to keep their jobs, to not make ripples? Take note of the other women in these comics and pay attention to what they do, what they say and how they say it.

I can’t turn away and not acknowledge the diversity beyond the page here as Bitch Planet prodominantly features women of color and other marginzalied folks: the creative teams of these stories half women and female indentifying and half men and PoC present as well. *insert a “this is the future the liberals want” meme*

While there are Black womenfolk galore on the pages of BP and there have always been Black women in the backpages with fantastic essays, it’s comforting to finally see a Black woman on a creative team credit (writing credit) in the form of Cheryl Lynn Easton! Lastly, peep the backcover of this issue for another nice surprise as well!

A very solid entry in what looks like a series of more Bitch Planet in the eyes of other BP fans and creative teams. I’m hyped. You should be too.

9.5 “Long-Live-Eleanor-Doane” battle screams Out Of 10