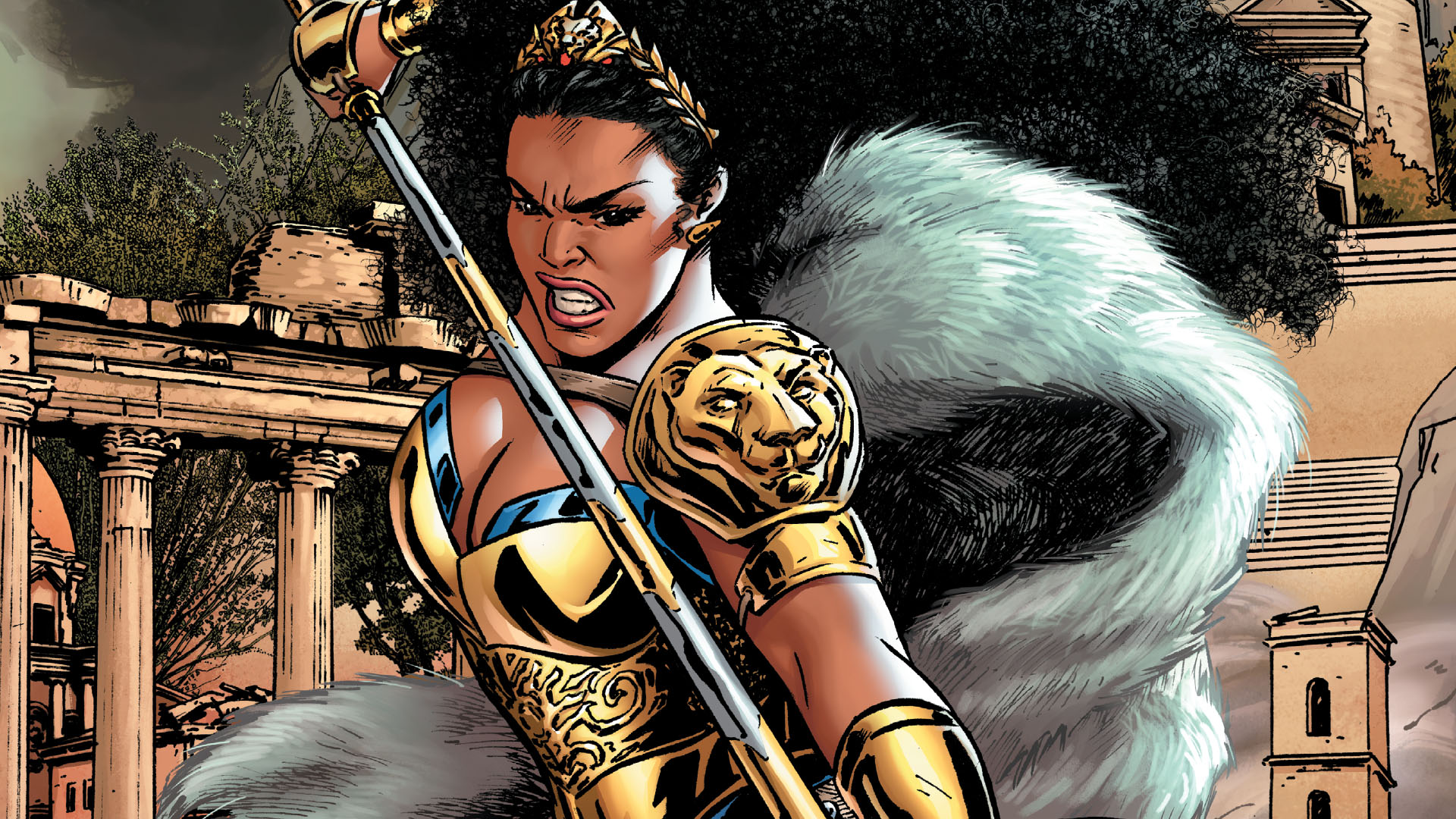 Carrie McClain, Black Nerd Problems: Steph, I have been a fan of yours for so long–it feels so good to see you WIN: from webcomics to a Kickstarter campaign to secure funds to a Marvel fanzine to now writing for the big two in companies–Marvel and now DC Comics. I would love to hear about all the new experiences in your professional career with writing your first (and not last) mini-series! Also I’d love to hear about working with your creative team which includes another fave Vita (Ayala) and Alitha Martinez–personally whom I consider one of comic’s best kept secrets too many fanboys never know about?

It’s been a bit of a roller coaster, but a ride I’ve enjoyed and felt grateful to ride. I can’t even begin to imagine what my life would be like right now if I hadn’t been clear in my desires and intent. And it’s all still so new and scary at the same time, but because I’ve been fortunate enough to participate in projects with people who create welcoming and nurturing environments, this has made the transition from writing webcomics to writing the Nubia and the Amazons series feel seamless.

Vita Ayala is so excellent at what they do when writing comics, but their true superpower is being a fantastic mentor. The time I’ve spent working alongside Vita feels like I’ve learned so much in a short amount of time, and I’ve been given the breathing room to apply what I’ve been learning each step of the way. And to work with an artist like Althia Martinez has been a godsend.

BNP: Nubia is beloved. Deeply by comic book lovers everyone but especially by Black and especially by Black women and Black femme/female presenting and identifying folks. What were your biggest challenges for you as a writer when starting to develop the story with Vita Ayala with Nubia, this iconic character? What did you make clear when writing her?

Stephanie Williams: Quite frankly, it’s been a bit overwhelming at times. We’ve been presented with a unique character that has made for an even more unique situation—Nubia’s existed for a few decades with a thin comic history. However, despite that lack of history, she’s still managed to garner a healthy fanbase. That’s the part that makes this both exhilarating and terrifying at the same time because she’s stayed relevant for so long, living in her fans’ minds as they’ve imagined who she is and all that she can be. That makes it tricky. No matter what we do for her and her story, it may not live up to the version of Nubia someone has had for years. That’s something we couldn’t put too much thought into, or it would just impede the creative process.

So with all of that in mind, we sat out to make it so that the Nubia reintroduced into DCU was her own. When you think of her, it’s not as Diana’s sister or the Black Wonder Woman, but simply as Nubia – now Queen Nubia of Themyscira. We want her to feel as though she’s been part of the DCU since her creation, and the mini-series is your opportunity to get to know this Amazon who has been protecting Doom’s Doorway for all this time. Now is her time to shine as a fleshed out character who is more than her title.

BNP: There were a lot of quiet moments in the first issue that stirred my heart and held me tight as I loved what I read and saw. Many moments of the new Amazons coming to the island: choosing their new names, figuring out their new identities, and sitting together at the feast–a rainbow of different women–different skin colors, body types…I just ate it all up. It really felt like a homecoming. There’ve been several horrific real-life issues that have been dominating the timeline lately regarding not just women in the world but plenty of marginalized identities–when developing the narrative, what did you want to bring to the table as a writer to inspire readers about this Themyscira? What is your biggest hope for those who pick up an issue of this series?

Stephanie Williams: I wanted Themyscira to feel like the island it’s supposed to be. This haven for women who fall to the violence of man’s world to be reborn again – a second go at life but unhindered and embraced by their sisters. So quite naturally, the island must be populated, as you see in the first issue.

To me, it would be a little challenging to buy into an island that felt very homogeneous and dishonest to the reality of who all would wind up on Themyscira. And it’s essential for readers to feel compelled to invest in Themyscira and the inhabitants, because they are now in the care of Nubia. There would be no reason to know how she operates as queen if you don’t care about her queendom. My biggest hope for those who pick up the series is for them to care and want to know more about the Amazons as much as they want to know about Nubia.

BNP: Speaking of womanhood, I just saw a tweet from you that one of the newer Amazons on the island is trans. Bia, right? How important was it to convey Black womanhood inclusive of our trans sisters in a time where we’re seeing such violence against them in the age of streaming apps and controversy that is making consumers rethink loyalty to such streaming apps?

Stephanie Williams: It was imperative. Again, going back to what I mentioned earlier, it needs to be clear that Themyscira welcomes ALL women. It was essential to continue to push Themyscira forward. Bia had been created well before any of the most recent invites involving bigoted and small-minded individuals refusing to be better human beings. Bia was created in love, and everyone at DC was highly supportive. That was the only driving force behind ensuring she existed beyond the subtext and was very much part of the greater DCU.

BNP: Last Question! The trajectory to writing and making comics, at least in the superhero genre, is one that traditionally has not always included folks who look like us–or at least put us on front street, on the front cover. From the explosion of people who self-publish, make webcomics, use crowdfunding, etc, what do you want to see in the next generation of those making the comics featuring all the heroes we love?

Stephanie Williams: Creators feel not only empowered to tell the stories they want with characters they’ve loved for years or entirely new characters but also to be heavily supported and protected from a lot of the vitriol that comes with doing the job you were paid to do.

The comic industry has a ways to go when it comes to pay and benefits, so honestly, it would be great if that could vastly improve for everyone creating stories for fans’ entertainment.

Check out BNP’s review of Nubia & the Amazons here.