If you need to refreshen your mind on issue one, go ahead and do so here.

Hello those who made it to issue two of this fantastic little miniseries that has really grabbed my attention and held on. Elena, the woman of some serious, serious secrets has been left behind on Earth, separated from her family. She was snatched away on blast off day on her way to the rocket that had one sole purpose: to save most but not all of humanity from a cruel and terrible fate–demise by an asteroid…which he saw in the last pages completely missed Earth and went elsewhere. In this issue we see the comic starting to show us just why it deserves its name: Broken World.

The aftermath includes people using legal suicide kits as part of the apocalyptic religion-cult leaving their children behind to find their bodies, Folks breaking into houses leaving people to defend themselves and even those blissfully celebrating in the streets with elaborate parties to soon be desperate for supplies and desperate for whatever they can take by any means necessary…

This is a Broken World. Not one that Elena wants any part of. 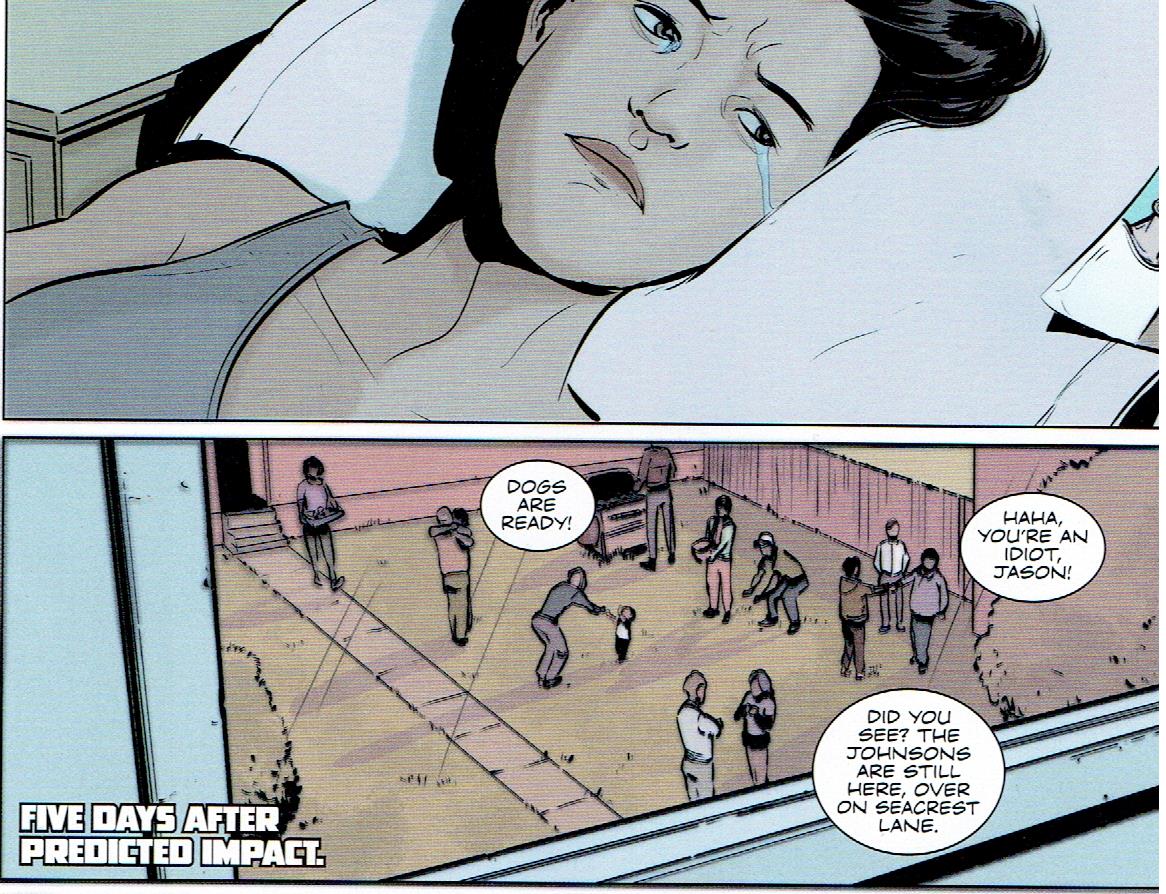 The time hops are presented with care and it flows smoothly showing us a glimpse of this world five days after expected impact of the asteroid to three months, etc. We are given a look into the lives of the people left behind: some are celebrating, spilling out into the streets with reckless abandon wasting resources and blissfully ignorant of the remaining military force on the outskirts. Some are forced to make due as a result of the legal suicides of their loved ones who were involved in ‘The Children’, the very cultish religion that still seeks followers and lurks around. Some are nvading the spaces of others and making off with what they can take…and then there is Elena. A woman broken. A woman torn on what to do. The only means of being with her family taken away from her. 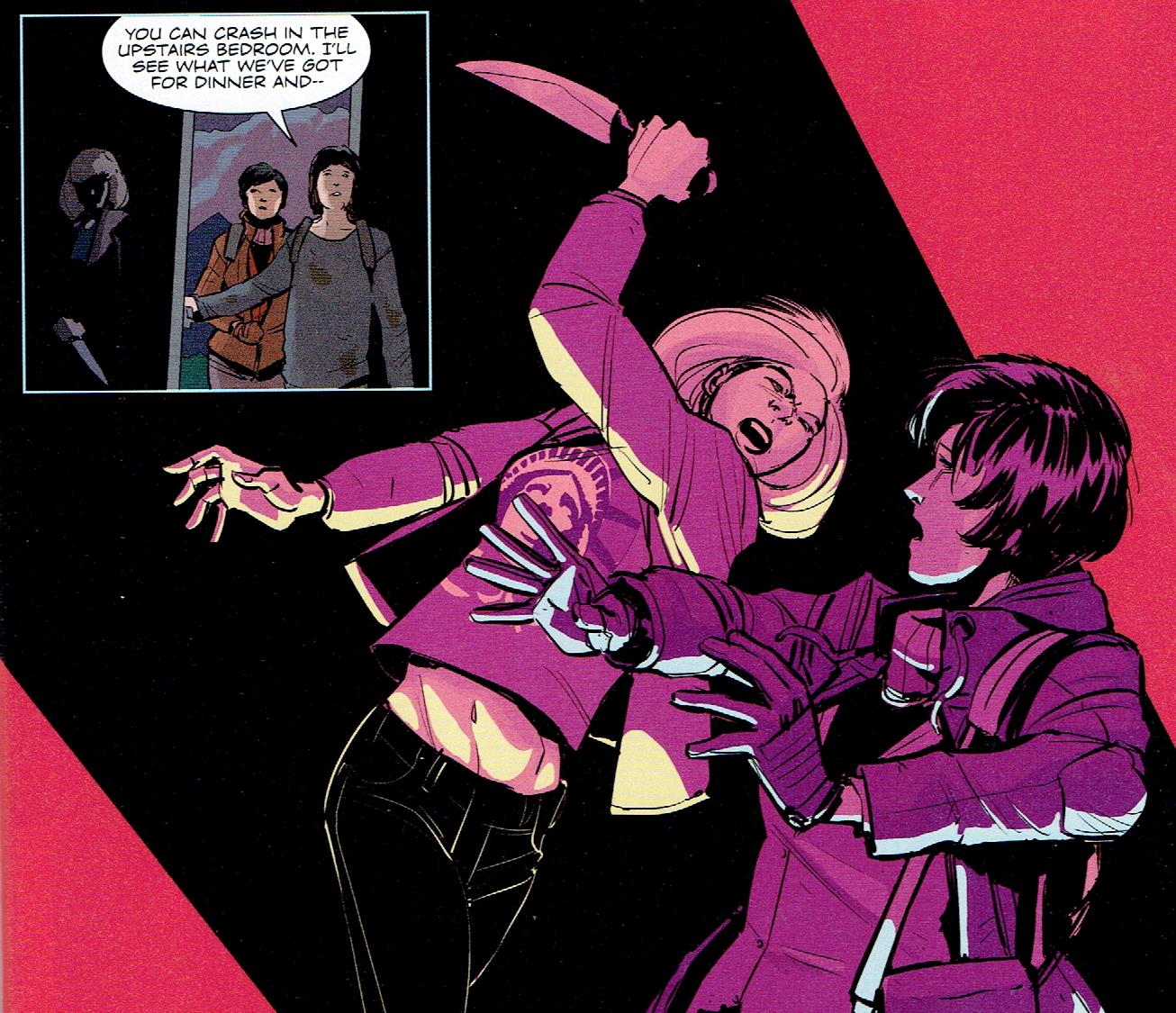 It’s a real treat to see how just society starts to break down and people lose it. The world did not end but that doesn’t mean things aren’t bleak. The proverbial feces will soon hit the fan for lots of people and Elena doesnt’t want to be around when that happens. She’s reminded that she’s a woman who, when determined can get anything done–which should possibly shed some light on her mysterious past and what she did to earn such a not coveted spot on a watch list that led to her being seperated from her family. Even though times are hard, it doesn’t mean this comic is bland and void of color. In fact, it’s the exact opposite. The art, coloring and lettering all work together to give us such a great combination. Some panels are striking when they need to (see panel above this paragraph), others like the first panel in the review of Elena crying demonstrate just how helpless and listless she is in that present moment.

Boom Studios has provided us with yet another mini-series in the form of Broken World and it’s moving quite along in the right direction with a strong team behind it and a gripping story that’s keeping me abroad. 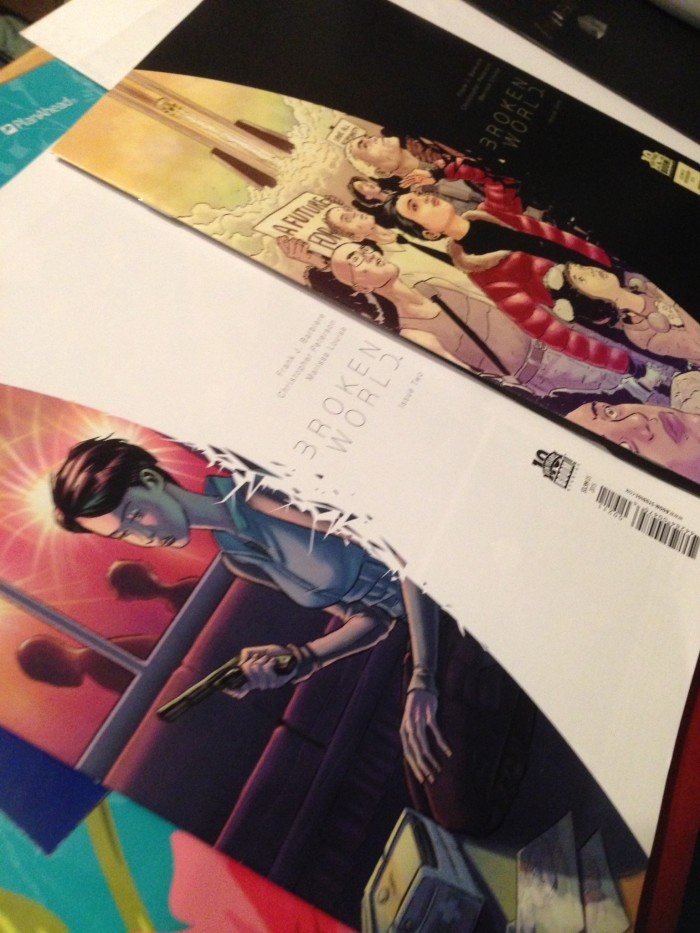 Note: Not sure if the photo does any justice but go buy the physical copies if you can. In the age where many of us  read more and more of our comics digitally, these copies look terrific. The art just translates really well on printed page and the covers are really neat too!