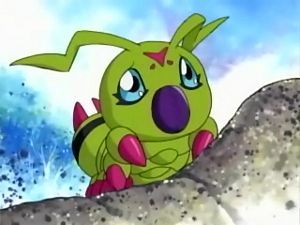 I stole a candy bar from the grocery down the street from my house. As I sprinted out the front door, men in suits came in and for half an hour you couldn’t tell me the fuzz weren’t on my behind. I felt so bad I immediately came clean to my mom and she told me it was okay, good people do things they shouldn’t sometimes (and I probably shouldn’t steal things).

I’ve been in a sordid love affair with nuance ever since.

Later that year, Digimon (Adventure 01) debuted on Fox Kids. This show, a hail Mary to compete with the Pokémon juggernaut building steam at the time, did something regularly that its rival anime has done a handful of times in over two decades: it told a human story and not one about its monsters.

For the uninitiated, Digimon tells the story of 8 children whose lives intersect at a summer camp where they are transported to a faraway land of data and corruption. The story plays like a bizarre cross of the aforementioned Pokemon and Lord of the Flies, the children left to fend for themselves in a brave and dangerous new world. Along the way, the characters grapple with issues like divorce (with Matt and TK being brothers each under the custody of one parent), illness (Tai nearly killing his sister Kari by trying to play with her when she had pneumonia), guilt, the immutability of family, and the nature of love, sincerity, and courage.

All of this was juxtaposed with the fantasy elements of dragons and evolution and kids being the chosen one made the hard-to-swallow thematic pills that much easier.

This story stuck with me for years.

Even now, I can recall from memory all of the best story beats – Puppetmon asking Cherrymon “What do those kids have that I don’t?” (Friends.), Tai running through the desert in a desperate attempt to show courage (resulting in the monstrosity of Skullgreymon), Sora finally realizing she loves her pink parrot partner Biyomon, and Kari’s illness informing Tai’s paranoia when the Dark Masters are wreaking havoc on the digital world.

It was a heavy load for a fifth grader, especially one only recently becoming acclimated with both anime and adult storytelling.

I wouldn’t trade it for anything. That summer with that anime was one of my biggest learning experiences, bar none. I learned things about life that are hard to discuss but so very necessary.

Years later, a queer non-binary person by the name of Rebecca Sugar began doing work on Adventure Time. Immediately, I began to see parallels – Finn’s hot-headed passion and quiet bitterness were Tai and Matt to a T.

Princess Bubblegum was a dead ringer for Mimi and her character arc. From the Earl of Lemongrab to the Ice King, the over the top yet still threatening villains are exactly up my alley as a lover of the Digidestined’s adventures.

Fast forward and we meet Mx. Sugar’s magnum opus of storytelling and representation in Steven Universe. This series tackles everything from queer and non-binary identities to family legacy to abusive relationships and does so with a poise and intentionality that the genre of children’s cartoon had scant seen before. When I look back at these episodes and issues, though, I can see a great deal of overlap in these themes and themes that Digimon tackled in its early seasons or even later.

Digimon Fusion is framed entirely around a war. Digimon Frontier sees human and Digimon spirits fusing. Digimon Data Squad involves our main character learning about his father and the sacrifices that parents make that children may never know. Every single season sees young people chosen to protect the digital and, ultimately, human worlds from destruction and the corruption that human error reaps wherever it sows.

I’d like to highlight two things, though: the queer relationships and the engagement with the narrative of emotional violence that Rebecca sugar touches on in the episodes featuring Jasper and Lapis Lazuli, culminating in “Alone at Sea.” I’m sitting these next to a series of episodes of Digimon Adventure (02), culminating in the episode “The Crest of Kindness.”

When we meet Lapis Lazuli and Jasper, we know them as their fusion and the harms that fusion is causing to our heroes, the Crystal Gems. What we learn about fusion is that while it is two gems combining, these gems retain their individual personalities, and this fusion does not have to be consensual. As we see more of the fusion, we learn that Jasper is coercing Lapis Lazuli into fusion, until Lapis decides that what they’re doing is wrong and escapes Jasper’s influences with Steven’s help. “Alone at Sea” is the reckoning of this relationship.

When we meet Ken Ichijouji and Wormmon, we know Wormmon as the meek but loyal servant of the digimon emperor. Oftentimes, Wormmon was blamed for the emperor’s mistakes, with little argument from either the other subjects of the emperor or the show’s protagonists. The male coding of both of these characters, I realize now, is somewhat intentional here: the violence is softened by a male character abusing another ostensibly male character.

Wormmon is a whipping boy, often (and jarringly) literally. As time goes on, we learn that the emperor is Ken, and that he became corrupted by the darkness within him after the death of his brother and the depression that followed. Eventually, Ken seeks redemption, but only after the death of Wormmon. “The Crest of Kindness” is the reckoning of this relationship.

Both of these story arcs highlight abuse but do so very differently. When I watch both of these now, I recognize something that I missed for some time: Sugar’s Universe takes this Digimon story arc and perfects it in a way that precious few shows could hope to for years.

This is not to say that abusive relationships did not exist in children’s media. Batman: The Animated Series, 2 Stupid Dogs, and Pinky and the Brain all have some level of engagement with abuse, but don’t look it in the eye the way either of these shows do.

On the one hand, Ken’s story involves finding redemption and repairing his relationship with Wormmon after going on a journey to bring him back to life. In Steven Universe, Lapis Lazuli finds the courage, through a newfound support system, to stand up and rebuke Jasper once and for all.

are these both valid and plausible ends to this storyline? Sure. However, one empowers while the other, well-meaning though it is, victimizes. For this reason, I feel that the Lapis Lazuli storyline is a logical extension and perfection of Ken’s, where he refuses to be victim to his own darkness and therefore turns over a new leaf. This outcome is a less realistic but more sanitary take and one, let me be clear, that I totally understand.

What we as a society knew and the boundaries we knew to exist at the time informed how we engaged in our media. Rebecca Sugar looked at that and so many other boundaries and decided to push until they crumbled.

I’ll be honest – I have no idea if Rebecca Sugar was influenced by or, indeed, has even seen Digimon in any capacity. What I do know is that as I sat to write a review the comparison came screaming at me, demanding to be seen.

If it is true that they’re really is no such thing as an original idea, maybe these two series have a common ancestor. Maybe Digimon walked so Steven Universe could run. Maybe it’s all coincidence.

Or maybe these are two series that are meant to be looked at and examined together, as two halves of the same coin, two chapters in the same book. At the very least, I cannot recommend enough watching these classics as companion pieces and seeing if the themes don’t come flying out at you, too.

Either way, I recommend both of these shows highly, and even moreso in parallel.

Uplifting the Silenced and Telling Necessary Stories: Untouchable and unrankable.