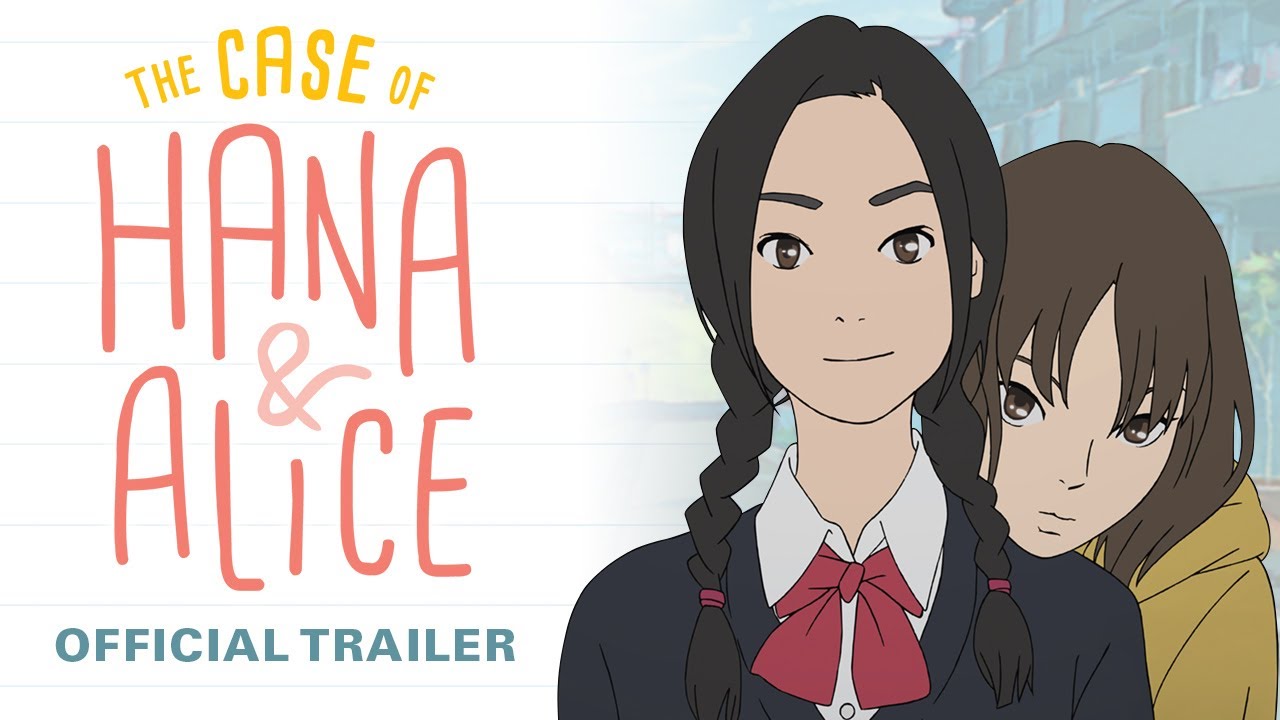 Here’s the first entry in the ‘Hidden Gem Anime Series to Enjoy’ series for you all to enjoy in the new year of 2023: The Case of Hana & Alice. I randomly came across this animated film while looking through the Tubi app and jotting down some of their anime offerings. I glimpsed and saw an animated film with two girls. After watching, I knew I found a gorgeous and offbeat film about random happenings and friendship that I wanted to write about.

When Alice transfers to a new school, she soon hears about a local urban legend: a male student who disappeared the previous year and is suspected to have been killed by his fellow students. The new house that she and her mother have moved in is the one he used to live in. To make matters worse, she now lives next door to a supposedly haunted home now occupied by a reclusive girl who ends up being one of the classmates of said student whose name is shrouded in mystery.  Her name is Hana, and with Alice’s help, they decide to investigate this “murder case.” Yet, their lack of detective skills, bad timing, and overall carefree attitudes prove to be obstacles in solving the case and means for a great adventure in the making.

It is important to note that The Case of Hana & Alice is based on existing material: not manga but a 2004 film titled Hana to Arisu. Directed by Shunji Iwai, a Japanese film director, writer, and documentary maker perhaps best known for his filmography centering Japanese youth, especially young women .( Fun Fact: he was a writer for 2018’s Fireworks, which was based on his 1993 live-action TV drama Fireworks, Should We See It from the Side or the Bottom?) While the original live action film runs more rom-com than mystery, Hana and Alice was first introduced with a big emphasis on their friendship and the hi-jinks they get involved in due to a boy. Here in this animated feature also directed by Iwai, the two titular characters do the same with a different narrative lens: solving a mystery and in a different format: animation.

Get in Loser, We’re Solving a Mystery:

Folks that The Case of Hana & Alice could appeal to include:

What Makes this Film Standout:

Here’s the thing, The Case of Hana & Alice is a slow starter. It is a film that took me by surprise. It is an animated film that is subtle until it isn’t. Fourteen-year-old Tetsuko (who will soon be nick-named Alice in her new town) is experiencing an upheaval: she’s moved with her mother to a new town in the boonies. They have moved there without her father as her parents have called it quits. She’s starting at a new school where she doesn’t know anyone, and she instantly finds herself the target of a group bullies.

Alice is just trying to get her bearings in a new place and survive. It is when she is given the seat of a student that she has been told was murdered, she realizes nothing will change if she keeps her head down. Determined to find out what happened, Alice begins investigating the death and the strange happenings around it. The audience and Alice may see a glimpse of Hana just a few minutes in but the two don’t speak and truly interact for the first time until about forty minutes in, when the rising action leads to their meeting face to face for the first time, finally.

What can NOT be understated is how The Case of Hana & Alice points to being hilarious, bizarre, oddball, and heartwarming all in one film. It is a difficult thing to categorize this film: sure it’s drama but not quite slice of life. The girls set off to solve a mystery, but there’s more to the story than that. Unexpected encounters, random acts of kindness, and failed stakeouts all find their way to these two girls, and it all colors the overall narrative.

There’s something really beautiful to behold in the silliness of losing rock paper scissors and having to dance down the center of a train car to an unassuming audience. Watching students scream and chant a not-exorcism in the classroom with no adults anymore makes more a bizarre and hilariously unexpected scene. The ante is upped when Hana and Alice leave home to find out more about the missing boy and what’s become of him. Every leg of the journey to uncover the truth leads them further from the truth and closer to the true heart of the matter. The film deals with guilt, speculation, gossip and failure with steady hands. Hana and Alice are just teenagers caught up in something bigger than them but also a mystery that is much closer to home.

The Case of Hana & Alice features rotoscoping, a technique used in animation to trace over live-action motion picture footage frame by frame. This was a surprise to see and honestly made me fall down a rabbit hole to see what films I had watched that used rotoscoping. I found a plethora of films and not just animated! Everything from early Disney films like Snow White and the Seven Dwarfs to a favorite of mine, The Girl Who Leapt Through Time.

I really, really love the visual look of this film. At times, the lines are simple, minimalist even. But combined with the backgrounds? The film features these really stunning, water-colored inspired backgrounds. There’s a depth to some backgrounds like Alice’s bedroom and the front of Hana’s house that are too beautiful to not drink in with my eyes that I recommend you taking a closer look at. Some of my favorite scenes in the entire film are the ones where Hana is in motion: the dancing and running scenes in particular. There’s a measure of grace and sophistication spread throughout especially the scenes where she’s sprinting with purpose, like this one. Simply put, The Case of Hana & Alice is worth watching and dissecting for the artwork and animation alone.

The Case of Hana & Alice heavily emphasizes the weird and offhand everyday life of teenagers and the shenanigans they get into when they put their minds to accomplishing something: Whether that is solving a local mystery, trading stories on whose mom is more embarrassing, or changing your social status at school by reinventing yourself. This is a film I’d recommend watching to see why stories about the friendships between girls are always worth watching. Iwai ‘s animated version of Hana and Alice is a charming addition to the animated film. It is also an animated offering that serves as a reminder that the most offbeat stories have characters to belong in them and lessons we can all learn from them.

You can find The Case of Hana & Alice streaming on the Tubi app.