***I’ve prepared a statement, but for maximum effect, hit play on the intstrumental below while you read this.****

First of all I want to thank my connect (Bendis), the most important person with all due respect. So by now, you’ve heard that when this Secret Wars murda muzik is done with, in the All New All Different Marvel, it’s gonna be your boy — Miles to tha, Morales to tha — as THE Spider-Man. Don’t worry, we ain’t killing Peter Parker, again. Mr Great Responsibility is gonna be my mentor, giving me tips and whatnot but hopefully not his horrible fucking luck. But yeah, that Black and Red is gonna be patrolling your Marvel Universe proper, none of that background Ultimate Universe elevator music anymore.

So I know some of y’all ain’t happy bout that. I wasn’t happy when Venom killed ma dukes, but I’m still out here grinding. So if you are THAT disappointed, I gotta ask where your mask and vigilante justice be at? I mean, at least get constructive with your disappointment, nahmean. A lot of people been throwing dirt on my name, calling me a C+ hero and inconsequential while they could ignore me while I was putting in work in a dying universe. Well guess what, I’m your muthafuckin C+ now homie! Can’t wait till you bring me home to your parents and blame me for fuckin’ up your GPA. 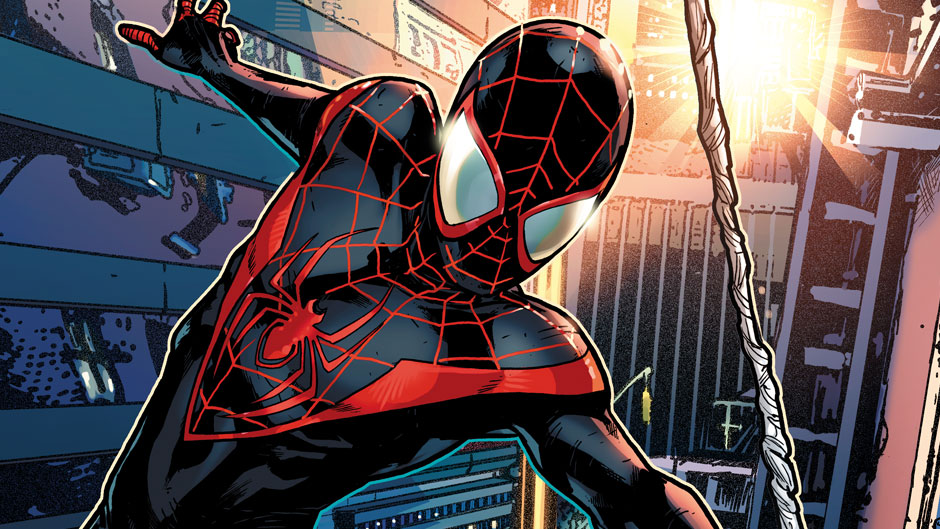 In all honesty though, I don’t know why I be catching all the webbing from dudebros, but since I’m official as fuck now, it don’t really matter. You want that Spider-Man mixtape, you want that webslinger number one in your collection, there’s only one supplier, b. I mean, true, I’m not the only webhead to get your fix, so you could go elsewhere. Spider-Man 2099 still kickin’ around? That’s cool, Miguel O’Hara still holding shit down in the space time continuum. Oh, you didn’t mean him? Ok, well, there’s Spider-Gwen? Or Spider-Woman? Silk, oh, Silk is what you we’re looking for? Nah? So you’re choices are between me, a Latino-American from the future, a teenage girl, an Asian-American woman and yet another Woman? Ganke, do my math on that, did I get that shit right? Gotdamn, is it really that hard for a White male Spider-Man in these Marvel streets? First they take your Spider-Man, then your flag, then your country (I’m lightweight upset new superhero Bree Newsome beat me to the flag joint, considering climbing shit is what I do, but big ups to her). But yo, you see we planned this shit out right? You can see how we flooded the Spider-Verse with diversity and now we got the Spidey-Family on fleek.

Ok, I know, I know. It has nothing, nothing at all to do with race. You just think it’s dumb for me to take over head Spider-Duties because you love Peter Parker so much. I love Peter Parker too. Trust me, he’s the GOAT. But now, he’s about to be the G(S)OAT (Greatest Sidekick of All Time). You know what that dude been through? Let that dude retire fam. I mean, what is Parker, like 24 or 70 or some shit by now? Let that man run his company (Parker Industries), supply me with some tech, raise a family and get on with his life. It’s time. It’s time.

But look on the bright side, at least you still getting a White Spider-Man movie, right? I mean, that’s pretty cool…right? Of course, when they reboot this franchise again in 2019 and a new crop of comic book fans only know Peter Parker as Labcoat Parker or Business Suit in the Boardroom Parker, you know who’s getting that screen time right? Seriously though, y’all not really trying to see Uncle Ben die for like the 17th time, yo. Hey, I’m still pretty new around here, I can wait. If none of this sits well with you, homie, I haven’t even started looking for a girlfriend yet. Anybody know what this universe’s Kate Bishop is doing? Wait, she’s what? Hawkeye? She still cute over here? She seeing anybody? Word? Man, let me get this fresh edge up and find out what’s really good with the world’s greatest archer. I’ll be right back. And excuse the boxes and the mess and the oppressive tears all over the place. I’m just moving in.