It’s all fun and rumors until sources start giving details, and the details are that Chris Pine is being cast as Green Lantern (either Hal Jordan or Guy Gardner) in the new DC Movie Universe. Then there’s the statement that Tyrese will be making an announcement Green Lantern related at SDCC. Of course, being fellow Lanterns of Sector 2814, you know Omar Holmon and William Evans had to weigh in on the rumors.

Will: Maaaan, listen, streets are talkin’. Streets out here grumblin’ like a muthafucka. Streets basically got the same scowl on their face that Vince Vaughn got cast to do for True Detective. They say there might, kinda, sorta, maybe be a casting for Green Lantern coming. Willpower personified getting another crack at the flick, man. That’s the good news. Bad news, Hal Jordan gonna fail the weigh-in because he eatin’ ayebody’s lunch, man. Another Hal Jordan flick, b? We got infinite sectors and we going back to the golden boy, again? Are you tellin’ me fuckin’ jokes, bruh?

Omar: There’s 7,199 other lanterns to choose from in the series, and about, hmm-mmmm, a good 5 others on Earth. Or I dunno, you could just go with the one everyone is most familiar with after years of being on TV or we just goin’ act like John Stewart ain’t that dude? We goin’ act like we don’t know nobody now? Is that what we doin?

Will: John Stewart ain’t just that dude, he’s THE dude. Bruh, John killed a planet with a sniper rifle. Dude maxed out his ring like it was a perk tree in an RPG, bruh. I mean, what we talkin’ ’bout, man? You gotta let John get some run on the big screen. But you know this ain’t about not recognizing the fucking talent that is John Stewart. This is about casting the Tom Brady of Lanterns any chance you get. Kyle Rayner is supposed to be the only White Lantern, but somebody need to tell Hollywood that shit.

Omar: It’s so hard for me to sit here and listen to these rumors NOT saying John Stewart’s name as the lead when he earned more respect across the galaxy than most heroes do on their own block. I’m not even going to address the rumors that Tyrese may be playing him because no… and because Idris Elba or nothing. But also if we’re going to do this let’s do this right. With the right actor for the job to make this work instead of setting up a missed alley oop.

Will: Naw man, NAW. This ain’t the one last heist, you don’t get to walk away from this shit, cuz we gonna talk about this Tyrese campaign. Tyrese been working harder on getting the John Stewart role than he did on his lines for the last 3 Fast and Furious flicks. Tyrese out here on Hollywood Blvd with a sign that says, “Will recite Green Lantern oath for food (or another $10M).” So I respect the hustle man and I respect his tenacity. But fuck no, man. I get it, White movie stars ask for some shit and often get it (see: Channing Tatum and the kinetic Bicycle 52 deck), but the operative word is “star.” Tyrese has a sustained movie career, which means that he finally beat Usher at SOMETHING, but naw man, I gotta pull out my own ring and put up the construct veto on that shit.

Omar: I wanna point out that I actually loved that Usher “My Way” video and song, which may be legit the only thing starring Tyrese that I can get down with. Listen, when John Stewart came into this world it was recorded on another planet saying and I fucking quote, “The opener of doors has been born.” See that’s some heavy shit. I need an actor that has that presence when they walk into a room. Tyrese walks into a room and the party gets called early. John Stewart has to be packaged as THE ROLE. John Stewart could do what Blade did for Marvel, movies wise. BIG PICTURE PEOPLE! Y’all tryin to hand that baton to Tyrese with that on the line?

Will: Man, we speculating on the breed of the unicorn, cuz John Stewart starring in a Lantern flick don’t look like it’s happening. And Chris “Tiberius” Pine is a good choice if we HAVE TO have Hal Jordan. But I’m over it man. You know I ride for Hal, but if we getting a non-John Stewart Lantern, can we at least get Ion, aka Kyle “I’m The Whole Spectrum Take Your Primary Colors On Somewhere” Rayner? Can we at least get the pure-hearted artist minus his dead girlfriend in the fridge? Since Young Justice got the Sleepy Time Tea, every screen interpretation of a GL has been all-Hal-everything. I blame Geoff Johns…well not really cuz he brought 2PAC back, but still…

Omar: It’s always going to annoy me because John was technically Ion first and…really the artist first as well but I wouldn’t mind seeing a Kyle movie … I’m not too sure how I’d feel about a Guy Gardner one. Those feel like our only other luck (read: gun to the head) of the draw that we got. You know we aren’t going to see any women Lanterns (Cruz, Katma, Arisia) so I feel like Diddy at the end of the “Victory” video. 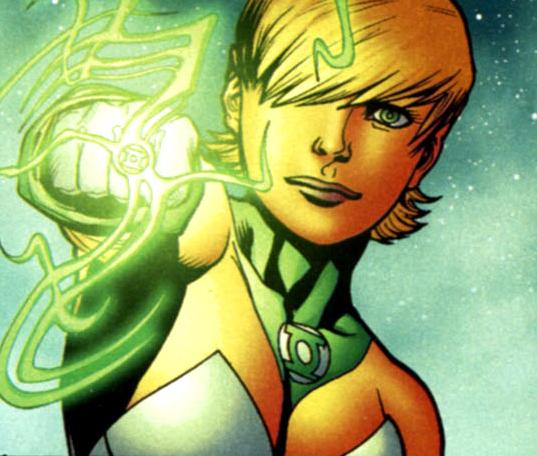 Will: Bruh, neither I nor Sway got the answers for that shit. I don’t want to see a Guy Gardner flick because you need a counter balance with Guy for him to function in a short story like that. Plus, I dealt with enough impulsive White dudes with tempers and little consequence in high school. I didn’t go to my reunion, so I damn sure ain’t trying to see that as the lead in my Lantern flick. But yo, Jessica Cruz, getting her own flick? Sign me up twice and once under my mother’s maiden name, homie. I’d be front row for that shit… But then that reminds me that there was a rumor where Michelle Rodriguez was up for a Green Lantern part, which probably means Jessica Cruz, which means that I might have just rolled my eyes at all of that shit so hard that I couldn’t pass a concussion test right now.

Omar: Kat-ma Tui all day. She got the history as well. Sinestro’s successor (after leading the rebels against his tyranny), John Stewart’s Drill Sergeant, and the epic tale of how she was able to translate the concept of the color Green to a blind alien she was trying to recruit (CLASSIC MATERIAL). Give that role to Gina Torres and get the awards ready. Nuff Said.

Will: Man, you know I can’t argue with ANYTHING Gina Torres.

My Black Girl Magic programming won’t allow it. Still, I got less confidence that DC / Warner Bros will do right by the next Green Lantern flick than Diddy got in performance stages after he busted his ass at the BET Awards. Regardless if Pine is playing Jordan or Gardner or fucking Kilowog for that matter, the likeliness of this shit bangin’ in the club is below sea level, fam.

Omar: Let’s keep it over power level 9,000, the only place we need Green Lantern cast right now is on The Flash TV show. They made allusions to him and made an obscure Firestorm look fantastic with CGI. Green Lantern can work on this show because they laid the grown work. You go to the big screen however, you’re working from the ground up with new actors, and the right creative team. We saw how it went last time and ain’t nobody trying to see Abin Sur die for a second time as if he chasing Uncle Ben’s record with these Spider-Man reboots. If you’re going to do Green Lantern you gotta give us a new angle, and someone we can trust to do it justice… we goin need more than (Chris) Pine-Sol to clear this shit up.