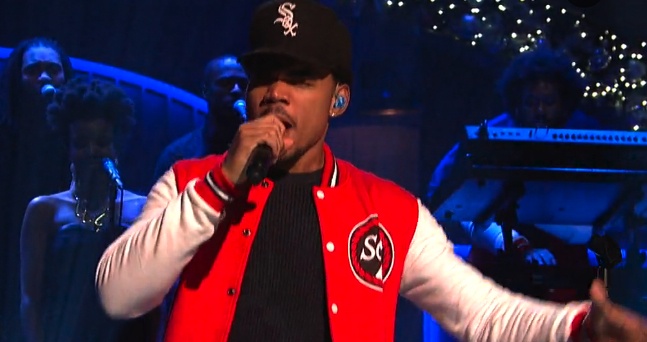 In some regard, I’m out of words. The past few months elude me. It doesn’t feel like the past 6 or even 2 months since my grandparents’ health declined, since I began to spend evenings with them, since grandfather and I were watching a documentary on Netflix, since he died, since my grandmother who had dementia just began calling out daddy in his absence, since the 68 days later when she died, since my family and I began to breathe again. No. It feels like one gigantic run on sentence that would have made the hairs on the back of my 11th grade English teacher’s neck stand straight on end.

This Wednesday, I sat on the sofa with my love catching up on SNL on Hulu (Hulu & Cool or nah?) and here comes Chance the Rapper. Now, I’m going to be straight up honest with you and no matter how stunned you are, you will NOT revoke my Black card. I had no idea who in the hell Chance the Rapper was. Seriously. They said his name and I heard a dial tone. None of his past work came to mind, but I found myself glued to the T.V. This dude was dropping bars with a band and Jamila Woods singing in the background. Oh, HELL YES! This I can get with.

In his first song, “Somewhere in Paradise,” Chance danced and rhymed and gave shout-outs to his teachers (biggups to that and to the dawning of winter break). His hook with Jeremih “I believe that if I fly, I’ll probably end up somewhere in paradise” was tugging at me a little bit. Take the past few months of my life out of it and just think about your own life. If you’re black or brown or of color and reading this, you’ve thought about death. You’ve thought about dying. You’ve most likely thought about it in regards to being killed or losing someone to violence. That’s where we’ve been these past few months, no these past few years in regards to Black lives. He’s a Chicago native performing on Saturday Night Live after the murder of Laquan McDonald and the atrocity of Spike Lee’s Chiraq. Come on!

If that wasn’t enough. In his next performance this dude sat on a stool and gave the most beautiful ode to his grandmother that I’ve ever heard. I was warned that this was coming. Warned out of love and because of already tightly stretched heart strings and the possibility of me imploding into a bucket of tears. I had to watch it though. I had to. He’s was about to sing to his grandmother. He was about to do what I couldn’t bring myself to do a week ago. I had to watch and watch I did.

The moment that the screen flashed to Chance sitting on a stool with the choir behind him took my breath away. No, that’s inaccurate. The moment that he opened his mouth and said that he was performing a song for his grandmother on national television because he could made me realize that I had been holding my breath. By the end of his song, I realized that I had been holding my breath for months. “Sunday Candy” is an ode to his grandmother, but honestly, it’s an ode to many Black matriarchs. I grew up poor. My grandmothers were everything to me.

She smelled like security. My God. I was consumed with a warmth that moved from my stomach to pouring down my cheeks. She was everything. My great grandmother who passed when I was sixteen. Now, my grandmother who departed this earth just a few weeks ago. She was the president of my fan club. She loved telling everyone that I was her only granddaughter. When church folk called me Little Mildred in her presence, you would have thought Barack and Oprah (two of her favorite people) had strolled into the sanctuary holding Jesus’s hand because that smile, y’all. That smile lit the nation.

My uncle is the speaker for the family. He gave tributes to both of my grandparents at their memorials services. We joke and say that we’re going to record him giving tributes to everyone for our services, because no one can do it like Joe. I am the poet laureate of the family. I wrote and performed poems for my grandparents at their 50th and 60th wedding anniversaries. I wrote a poem for my grandfather that was printed in the program for his memorial service. He made his transition on September 28th of this year. A day or two after my grandmother passed, my uncle asked if I would do the same for my grandmother. I tried. Listen to me. I tried so hard, y’all. Nothing came out. No words were good enough. I sat up one night looking at my iPad screen, then holding a pen and paper until about 3AM. I never called my uncle and said no. I just didn’t do it. I couldn’t do it. It’s not that I loved one of my grandparents more than the other. It’s just that, I have come to realize, the grief was unbearable. I’m still grieving. Maybe that sounds like “duh?” to you, but I’m used to being able to move on. I’m used to toughing it out. I’m used to having enough people and things to take care of that the weight of grief could never keep me down for too long. I’m used to being the strong that only Black folk are known to be. You know what I mean?

Maybe Chance wasn’t on SNL to tell me that my strength at this moment is bullshit and that my grief is exactly where I’m supposed to be, but he did. That song did. Sunday Candy? My grandmother would have loved every word of that song. She would have giggled at the thought of him fighting political fights and then going to church on Sunday. It would have been the giggle that meant, “I know that’s right, baby” and would have been followed by a wink. My grandfather would have sat stately next to her nodding and smiling. They both used to sound exactly like why the church choir was tired. Honestly, they still do. I hear them. I hear them a bit more loudly than when they were here, but the pain of not touching them is some shit. It’s the shit I thought that I’d be able to handle because I’ve been through this before and I’m older now and stronger now. Nah.

If I can offer you anything it’s this. Don’t let anyone, including yourself, tell you that you are too old or too strong or too Black to grieve. You should never get used to death. Religious or political views aside. We should never get used to losing the people we love, young or old. I do believe that our ancestors live on and never truly die, but I am no longer denying the void left by the absence of their physical presence. A very good friend of mine who works magic all over the hearts of folks who let her in and the love of my life both told me this. They’ve been telling me this. Telling me to cry and to stop holding it in. Maybe Chance the Rapper’s Sunday Candy was the exclamation that I needed to drive the points home. Maybe we have been culturally indoctrinated to believe that melanin is a cloak of armor and that pain is beneath us.

Maybe it’s just me. Well, not after that song. After that song I cried. I cried much of the night and guess what? I’m still here. I’m still here to smile and grieve again. I’ll be grieving for a while, but now I’ve got a little Sunday Candy and another chance at learning to let go and to be weak when I need to be.