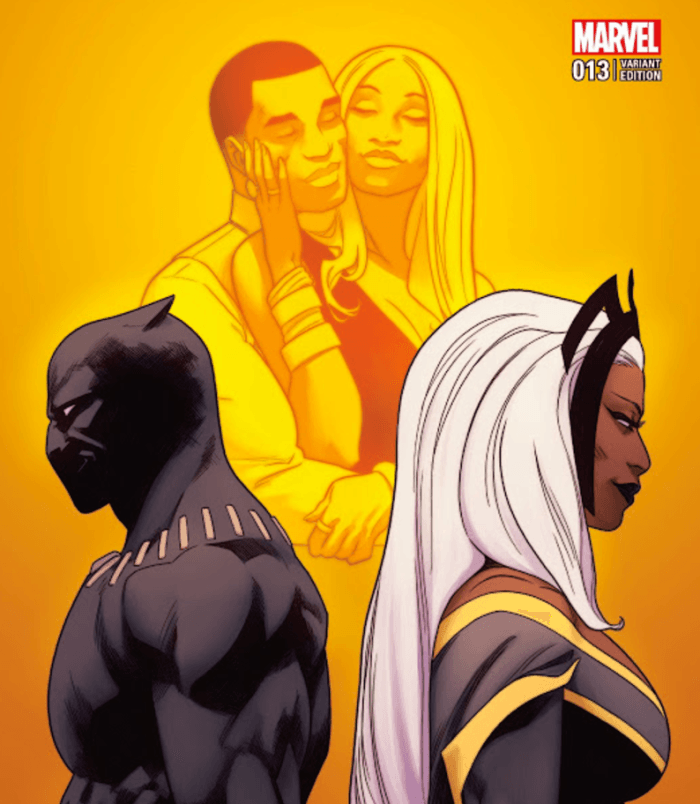 Lemme tell you something bout Black joy. Lemme learn ya a lil’ something ’bout People of Color flourishing right quick. That is my shit, for real-for real. You don’t understand; I’ma just give you a quick rundown just in case this write up is uncovered 20 years later in an online time capsule. It’s 2017 right now and on top of a shitty real estate mogul being the President of the (rarely) United States of America, hate speech getting book deals and platforms on cable television, as well as Nazis getting the sympathy for getting decked in the face (rightfully so), Black / People of color are still getting shot, got, and ran up on for just existing.

It’s been said before that if you ever wondered what actions you would have taken during the Civil Rights era, you’re in the sequel right now. That’s another editorial all together; right now, I’m talking about that shit that makes your heart melt and allows you to take your worries off for the weekend before getting back to it on Monday. I’m talking about unwinding with seeing characters you grew up with flourish, living their best life. I’m a huge fan of characters moving through trauma, PTSD, legit choices between life or death, kill or be killed. That’s my jam but there’s also seeing characters you’re invested in get that silver lining.

That silver lining for me was seeing Ororo Munroe [Storm if you with the shits], the Beyoncé of Mutantkind, marrying The Black Panther, King T’Challa of Wakanda. This was a story that made sense giving the build upon their first meeting in their teens serving as an open door to come back to. True power couple goals, Storm would be on a platform that’d put her heavily in the public eye and people waiting for her to mess up so they can slander mutants but Storm been more regal than the best of’em.

We didn’t get to see this couple grow over the years as the marriage was ended abruptly for Avengers vs X-Men cross-over as a consequence of the war. Shit was weak, Reginald Hudlin and Scot Eaton didn’t redefine T’Challa’s beginnings for this shit right here. When the Watcher shows up to your wedding? When Uatu is eating hor d’oeurves at your wedding ceremony, you gotta give the fandom way more than a couple story arcs of marriage. Naaah, you gotta come with more character development and growth as a union than that. We could have had it all Marvel. [In Adele] We coulda had it aaaaaaaaaaaaaaall.

Then hope strikes back as years later, we’re seeing T’Challa and Ororo talking one on one, outside of saving the world, in the Black Panther #13?! T’Challa, the pragmatic scientist asking Ororo about her experiences as a goddess? Trying to get a better understanding of where the Wakandan gods stand with the people? *Grrmmmm rapper hearing a sick beat growl*. That’s the jam I want on my French toast. Shouts to Ta-Nehisi Coates and for giving us a glimmer of hope for all of us, so we can just roll in the deep with this ship. Lemme be clear, this isn’t to say these characters aren’t interesting in their own rights or need the social construct of marriage in order to be prominent. 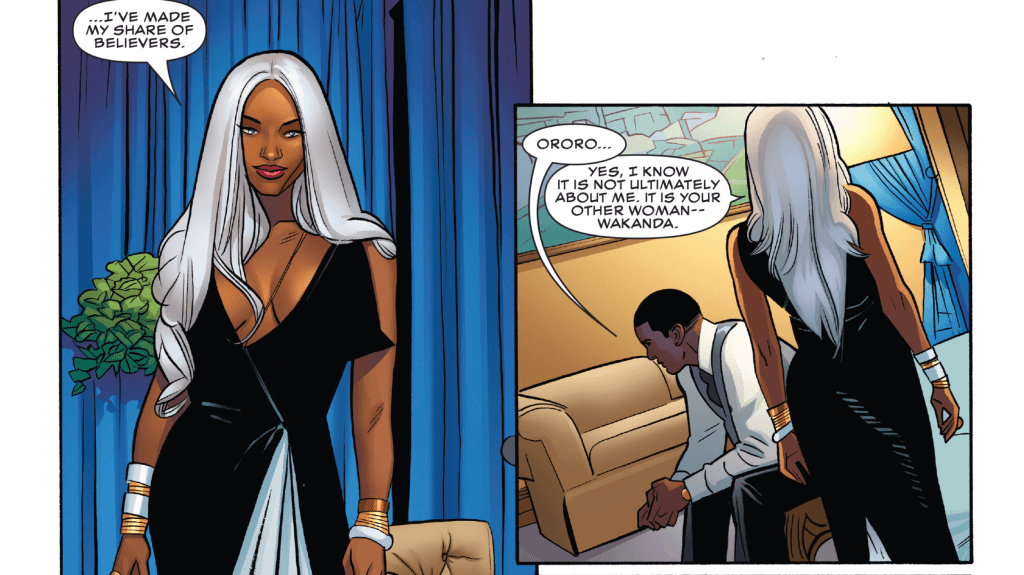 I’m big on follow-up, we never had a chance to see this couple develop. They were given back story of knowing each other as kids from way back [Storm saving T’Challa’s life], that mythos was expanded upon to set up for the marriage [Dunno why they had Storm all damsel like that but ANYWAY]. I like seeing that since I’m older now and marriage is a thing one tends to think about (even though the majority of my married friends suggest the opposite and getting a dog instead of a child).

You may be saying, “Dude, get over it.” And to that I say but hear me out doe. I grew up on Marvel man, as I’m older now and hindsight being a hell of a drug when you a consumer, I’m going to have bars for that ass. You can love something and critique it as well constructively, yo. I’m just sayin’, I enjoy seeing Black and Brown characters flourishing and exploring aspects of a relationship (or enjoying being alone). If I’m being reflective about it, perhaps that’s because my parents were divorced, so the way relationships are and could be are pretty different growing up under that point of view as a kid. Also, you start to look for other Black and Brown couples in Marvel and they’re not too common.

If we’re talking present day we have Misty Knight and Sam Wilson, Monica Rambeau and Adam Bradshear. Previously we’ve had the mentioned Storm and Black Panther, Monica Rambeau and Brother Voodoo (a funny whatever-ship from the Marvel Divas comics), Surge and Prodigy from X-Men (very short lived but counts). I’m sure I’m missed some [I’m talking post-blaxploitation era and into 2000’s though] but take the time to think about it, it’s really only a handful. Ya might’ve noticed I listed Black / Brown interracial couples on that as well.

This is my first comprehension of an interracial couple, not realizing at the time that my sister and brother were products of an interracial marriage. My mother’s (who is Black) first husband was Indian. I realized the just how close to home of this when I was reading an issue of Ms. Marvel where G. Willow Wilson had Kamala Khan’s Pakistani brother Aamir marrying Tyesha, a Black Muslim woman. 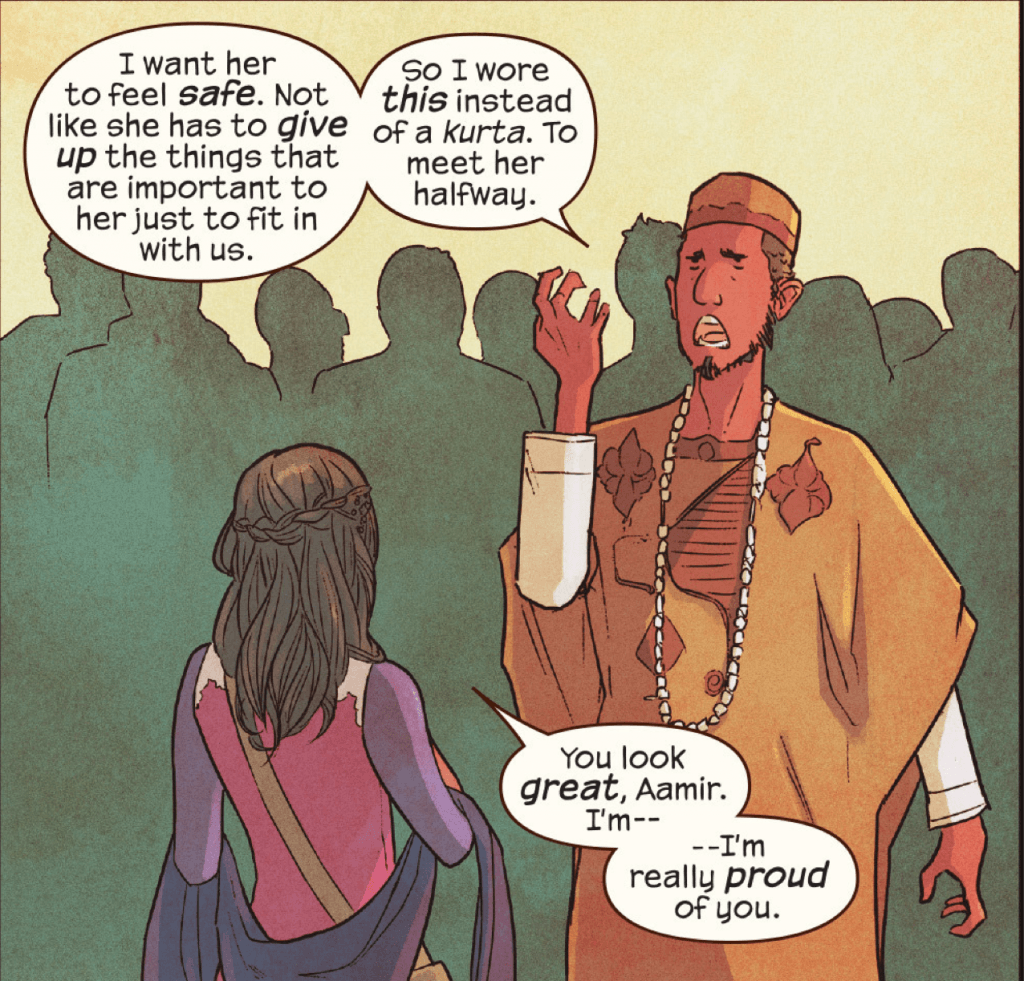 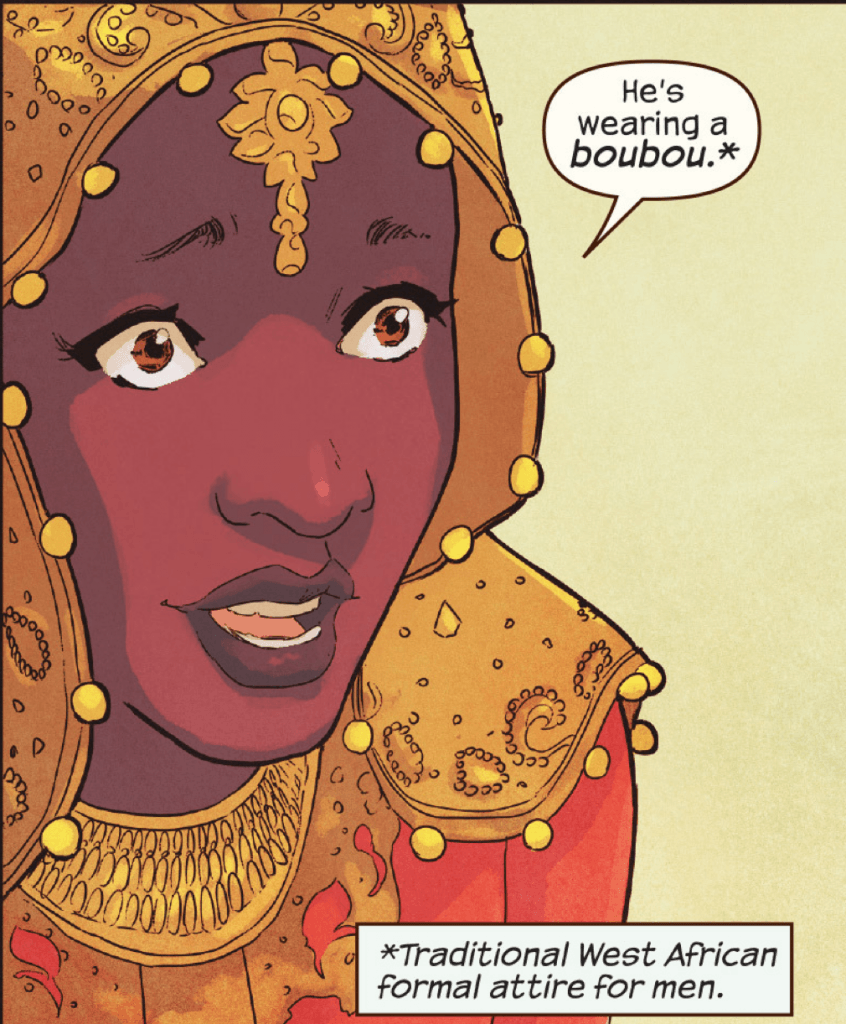 Now these two are supportive characters in Kamala’s book but this wedding was incredible as we see two people of color with different cultures meeting one another in the middle as a notion of solidarity. Aamir and Tyesha end up surprising one another with these gestures from both their behalf’s. My Moms was obviously Black but she had similar experiences going into a different culture and her meeting in the middle was learning Indian dishes from her sister in law.

Fam, this is food I’d been eating for years, not knowing the name of’em or the story of how she learned to make them until my father told me in passing nonchalantly [in 2016, mind you] as we were eating at an Indian restaurant. “You mother made this better.” It just goes to show that interracial doesn’t mean white x POC as the default as we’re seeing in media. Two people with dark skin brown skin or Black can be in an interracial relationship or biracial as well. 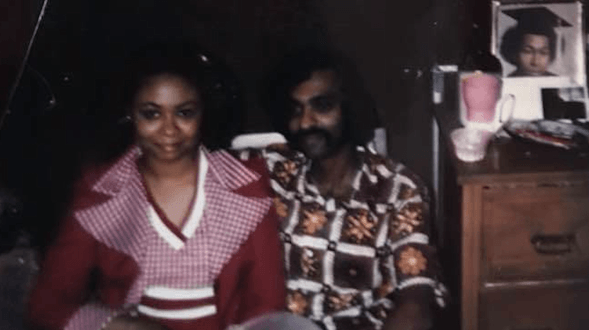 There was a statement about how Spider-Man will never be married again (they retconned mad history just to break up his marriage with Mary Jane, breh) and although other characters are, you get this sense that characters in this union aren’t easy to write or they grow stale. I think that’s quite the opposite. Taking it back to Storm and Panther, watching them get to relearn each other through marriage was golden. There were a few instances of a culture gap surface being scratched, like Storm meeting the Panther god Bast for the wedding blessing that were explored.

There’s so many paths that their dynamic could have given us in those regards. Ororo Munroe is a Kenyan American woman that grew up on Cairo, Egypt’s streets and America, T’Challa is the boy who would be king of the most prestigious country, Wakanda. There’s so many culture gaps and faux pas to unwind till death did them part. Each being a learning experience for both characters as well as the readers. 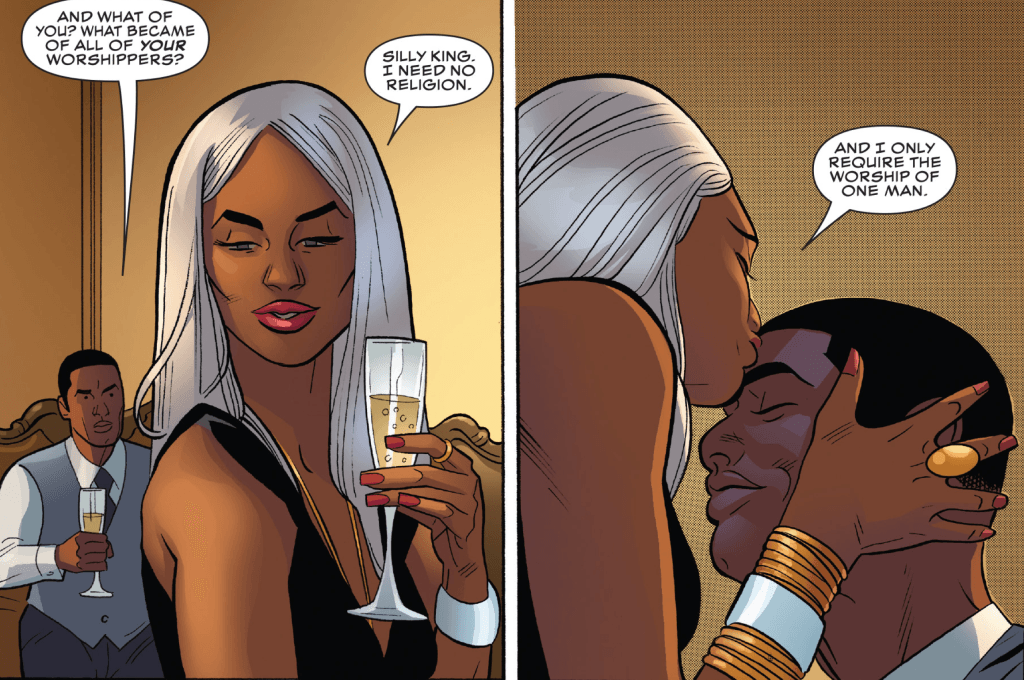 Be clear, I’m not trying to stan for marriage as the end all be all of relationship evolutions, I understand the dynamics of a relationships are way different as we have folks that are polyamorous, asexual, open relationships, and other expressions of partnership. We may be far off from Marvel exploring those routes with their characters but what have shows and separates comics doing the work in that regard. Also, as Panther and Storm experiencing a divorce, that can be a option to explore because it at times doesn’t work out for folks, I get that, (divorce is my shit too) but when they haven’t been married for even a year in comic book time (or real time really), you can tell when it’s forced.

Y’all ain’t got to mind me tho. I’m just talking my shit and unpacking all these feels from the icebox where my heart use to be (I know, I thought long and hard about making that reference). I’m just happy to see there still being something between Ororo and T’Challa [that doesn’t literally involve the end of the world for them to get together for old time’s sake]. I’m just happy to see people out here expressing love and shit up in these panels, nah mean? 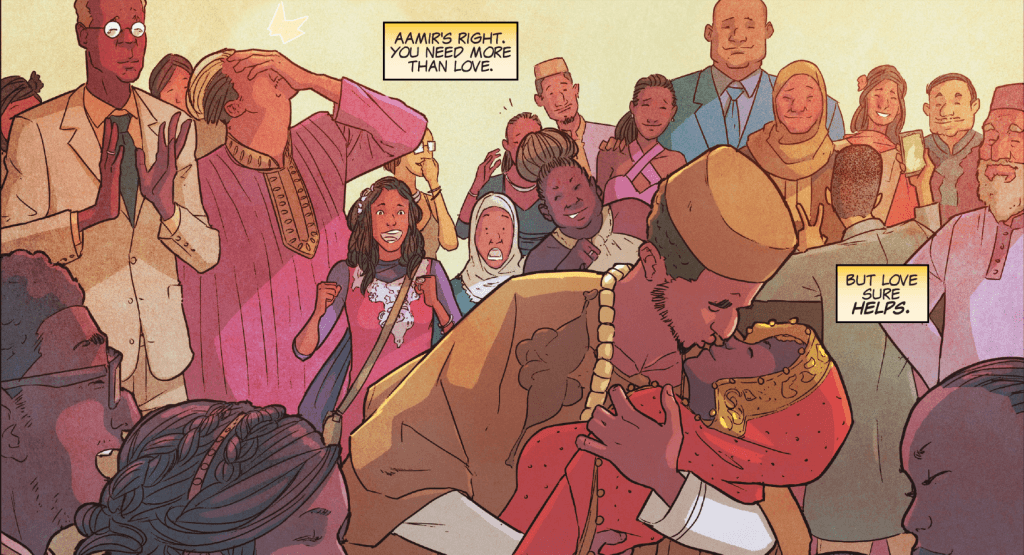