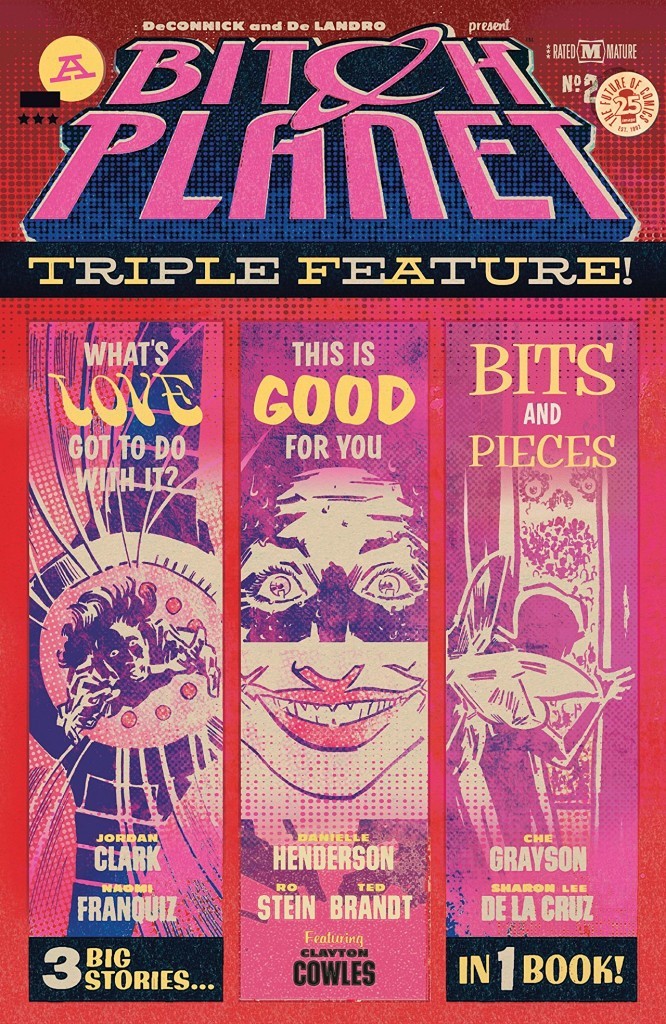 Super stoked to see Che Grayson here with a writing credit as she is a storyteller and a person who understands how important seeing and writing black women into the stories we consume. In the first comic that graces the pages we are introduced to a gaggle of girls, a bunch of tweens in competition mode with a stage before them: welcome to the “Miss Tween Neck Competition” which features two hosts with the most unnerving smiles (and one with a very convincing likeness to the leader of the free world aka the man that many of us have come to nickname “45”) These kids are getting ready for the finale and each panel gets more and more creepier and unsettling. 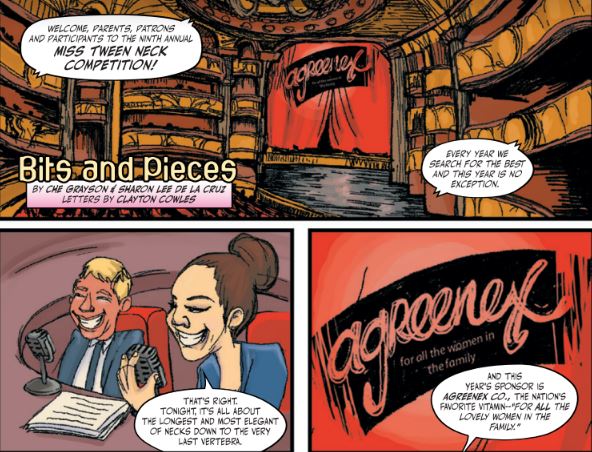 I also want to note that this is the first entry in the BP Triple Feature stories to have child protagonists. It makes me think because in the entire Bitch Planet universe we’ve only touched upon the youth of a few characters Penny and more so into the childhood of Maiko. Using children, using little girls makes this entry eerier and very, very effective in the way how black bodies are used again and again exploited for the trauma porn that populates the media and triggers me and people that look like me. It makes me think how on Black girls aren’t always guaranteed a childhood due to predators that the music industry refuses to hold accountable. Let us remember that Black girls are also viewed as older, less innocent and more likely to be guilty of infractions than their peers.

Del La Cruz’s art disarms us from the first page in “Oh it’s cute, right? Oh, it’s about little girls? Oh. OH. OH NO.” It’s a devastating punch in the gut when you get to the final pages, the last one in particular: I remember wanting to scream in horror. The girls aren’t sexualized by De La Cruz’s hands as an artist here, however, she does expertly uses her talents to play on beauty standards to show how we put women on display–in their girlhood first. Truly this comic is the curveball in this entire body of work; it’s a sure winner in making you ponder on what winning means when you’re prized not for the sum parts of your body but only certain ones. 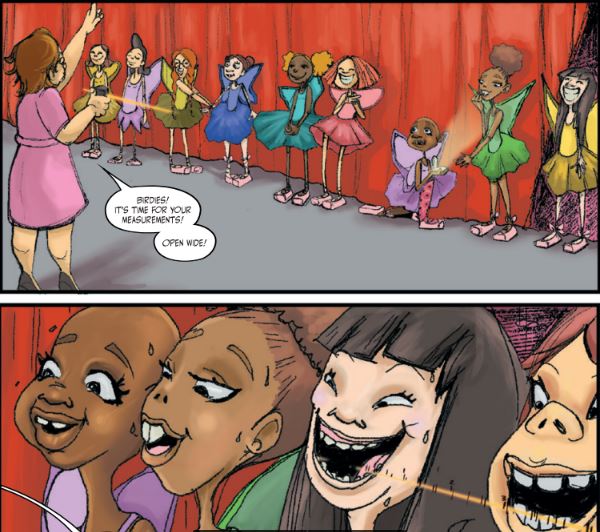 “This Is Good For You” is a masterpiece. This comic manages to break the fourth wall while showing a story within a story. Let me explain: this particular comic opens to two young women finding their seats in a movie theater. After some initial trouble, they are seated and the show begins and what follows next is a sort of PSA on what noncompliance looks like in society and very strong suggestions on what and how being compliant looks like. When I look at who’s responsible as the writer I can smile because it’s Danielle Henderson who graced us with the very first essay in back pages of the very first issue of Bitch Planet! WORD?!

Henderson knows the BP universe well and this comic shines because of it. I loved seeing Ro Stein and Ted Brandt’s names as well because I’m familiar with their work on Princeless: The Private Princess series penned by Jeremy Whitley. In this comic their work is top tier as the PSA-mini documentary that is playing is something the reader gets sucked into as art imitates life: one too many parallels are drawn that hit too close to home in real life. The art looks fantastic and it’s all drawn, inked, and lettered to perfection. At the end, you’re left looking at the two young women who originally came in to watch: one is obviously horrified while the one is delighted, entertained even finishing the line “good for you” with the narrator of the film. This comic is a visually appealing look at how seductive and effective the media can be in broadcasting the “right” messages. Superb job! 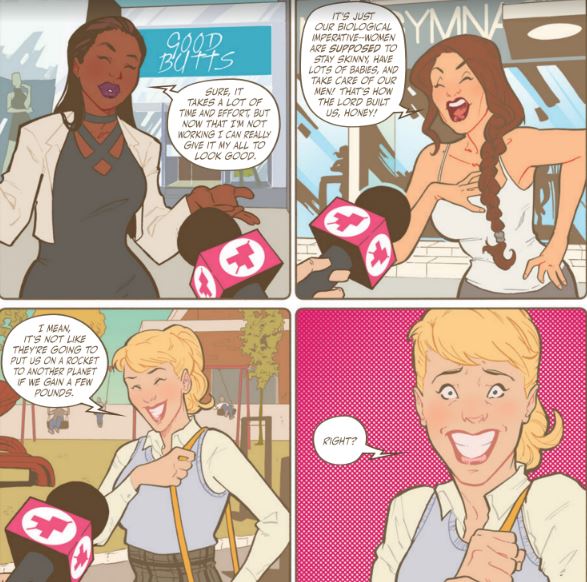 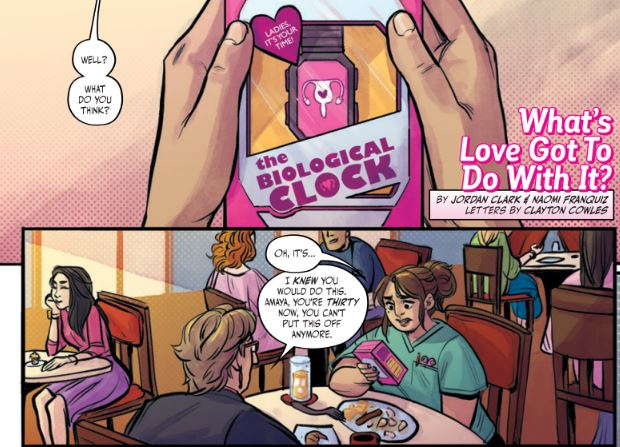 First [brown hand clap emoji] Panel [brown hand clap emoji] In [brown hand clap emoji] and I’m shook. LORDT. We knew that womenfolk in the Bitch Planet universe got locked up and sent to space for a variety of reasons, a garden variety, you know the type of garden your Nana used to grow that grew everything–however what hasn’t been explored in too much detail is the type of rules and stipulations women have to live under in society. With that in mind, meet Amaya, our Latinx protagonist who is thirty and is going against the rules of the land by not being married, attached, and expecting. Oh, joy. And also, ouch. I told you anything and everything attached to Bitch Planet has a grain a salt somewhere. [This opening conversation unsuspectingly sounded too similar to one I had with a family member Sunday. UGHHHHH.] If something doesn’t pop off soon for Amaya in the romance department there will be great consequences that won’t only impact her but her family and while unfair, there’s no way around this.

Kudos to writer Jordan Clark — thus begins her adventure to find “the one” and I gotta tell it’s such an entertaining and hilariously tragic train ride: from awful blind dates set up by your well-meaning mother to the new age online dating to…. “That New App” that had me scream laughing and beyond–this comic is NOT to be missed. The art looks familiar because I know Naomi Franquiz from her work in the Queer Witch Anthology from Power & Magic Press (that has a second Kickstarter campaign currently running to fund the second book in the series, titled Immortal Souls, by the way) Franquiz transitions from each trial and error approach that Amaya uses with ease and emotions are expressed and felt flawlessly through the art: uneasiness, anger, relief and even the creep factor from different male characters. The plot twist at the end is a nice touch and serves to show how in society, in this society how womenfolk are pushed to the contend with so much just to not be seen and treated as less than. There’s a quip to colorism through in there too so please don’t rush reading and miss it at the end. 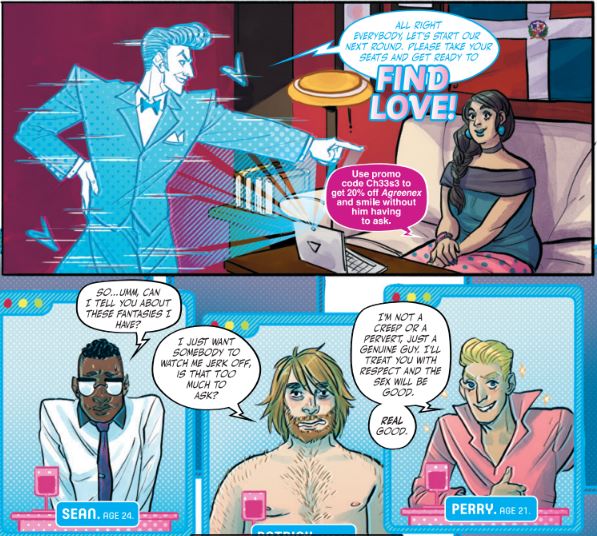 Just another stunning piece in the expanded universe of Bitch Planet. These triple features comics were such a good idea, if you missed issue #1 this one should make you a believer so be sure to buy copies of both. For real, fam. Do it. Don’t sleep on these.

9.5 Complicated Loopholes to Fall Back On out of 10