As I try to navigate the Javits Center to get the Super Asian America Panel, I find myself walking into one of the queue halls. I see a bunch of folks who look like me waiting patiently along the walls and figure I must be in the right place. Within about a minute, a volunteer asks us if we’re all there for a panel, to which all of us nod our heads. They quickly inform us that the panel before Super Asian America is about to let out and that we were more than welcome to find a seat. Within moments, I situate myself at the front of the room, and moments later the entire room is packed. 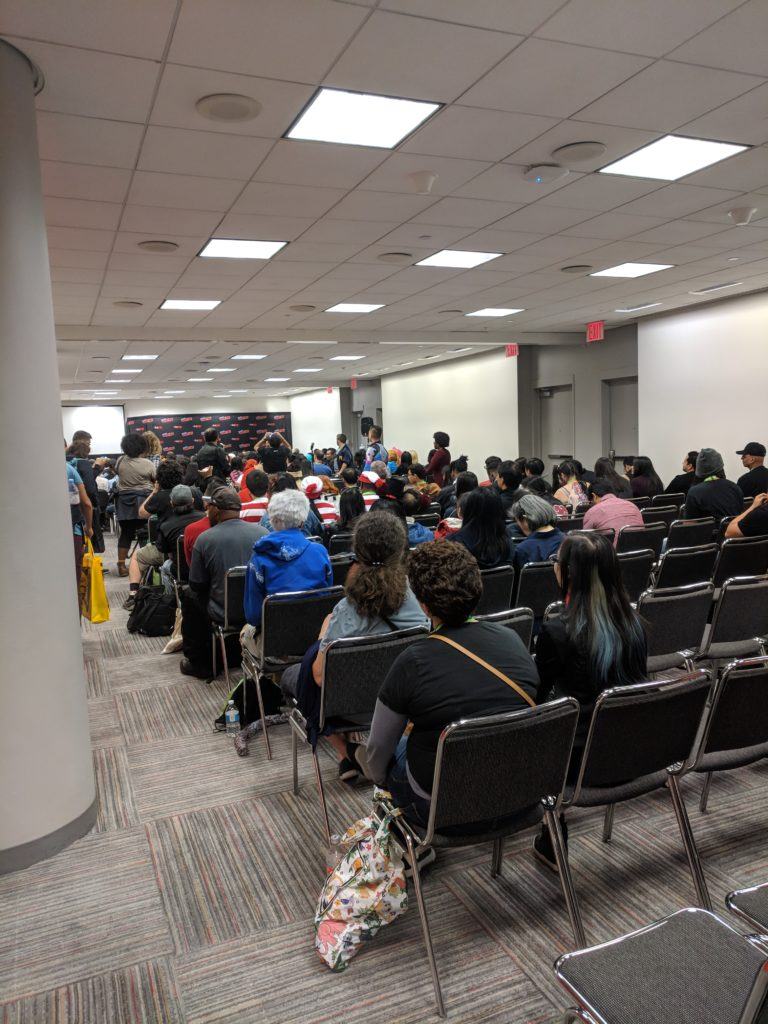 Moderated by Mike Le, founder of racebending.com, the panel had a wide range of Asian American professionals.

Le opened the panel by discussing how 2018 had been a landmark year for Asian American media. Between Crazy Rich Asians, To All the Boys I’ve Loved Before, Kim’s Convenience, Searching, Fresh off the Boat, and the announcement of an Avatar: The Last Airbender series with racially appropriate casting, it was a good year. Crazy Rich Asians and Searching in particular were pivotal moments, because they featured two Asian American leads in two very different genres succeeding, or better put, thriving at the box office. Liu said it best herself, “We’ve been suffering with Hollywood’s obsession with yellowface… The wires were not connecting for some reason (called white supremacy).” 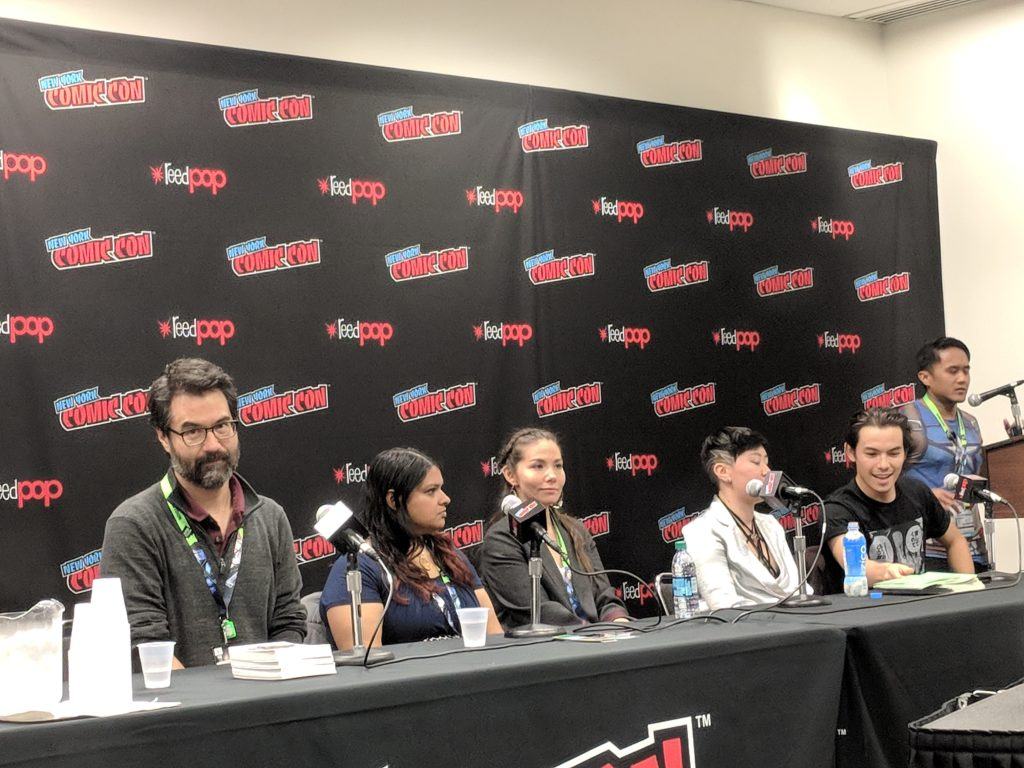 This was a year where audiences proved that white men didn’t need to be the focal point of a film to succeed, and that we were allowed opportunities to “dream Asian.” It had been decades since Hollywood had put real money into a film with Asian American leads, whether it was The Joy Luck Club or Harold and Kumar. They talked about how all the higher ups were looking for an excuse not to fund these films but how the audiences kept showing up for it.

The Impacts of Fans

The conversation then shifted to talk about fandom, both its beauty and its blight. There was discussion about how Kelly Marie Tran was pushed off social media and each creator responded with their approach to dealing with trolls. All can be elegantly summed up as “Block All Cruel People.” Chanani emphasized that it was important not to give those folks any more power, and Zhang reiterated the need to report abusive behavior that groups like ComicsGate engage in. Pak and Liu talked about how succeeding in the industry was the best life. Liu confidently stated, “I’m going to outlast you…forever.” Pak talked about the hashtag, #AsAmCreatorRollCall, that he curated to bolster support for other Asian American creatives.

Ryan Potter talked about how a lot of the hate was bred from ignorance. He continued, “They probably have never tried soy sauce or white rice, the most basic ingredients,” to which the entire room burst into laughter. “Am I wrong?” Now, while there is a little to unpack there, it’s hard to overstate how earnest Potter is as a person. He is charismatic and genuinely cares about his fans. His 45-second Tim Drake demo eventually got him noticed by Geoff Johns, which led to his current gig as Beast Boy, and he promoted his buddy Brandon Siu for Zuko in a similar vein. 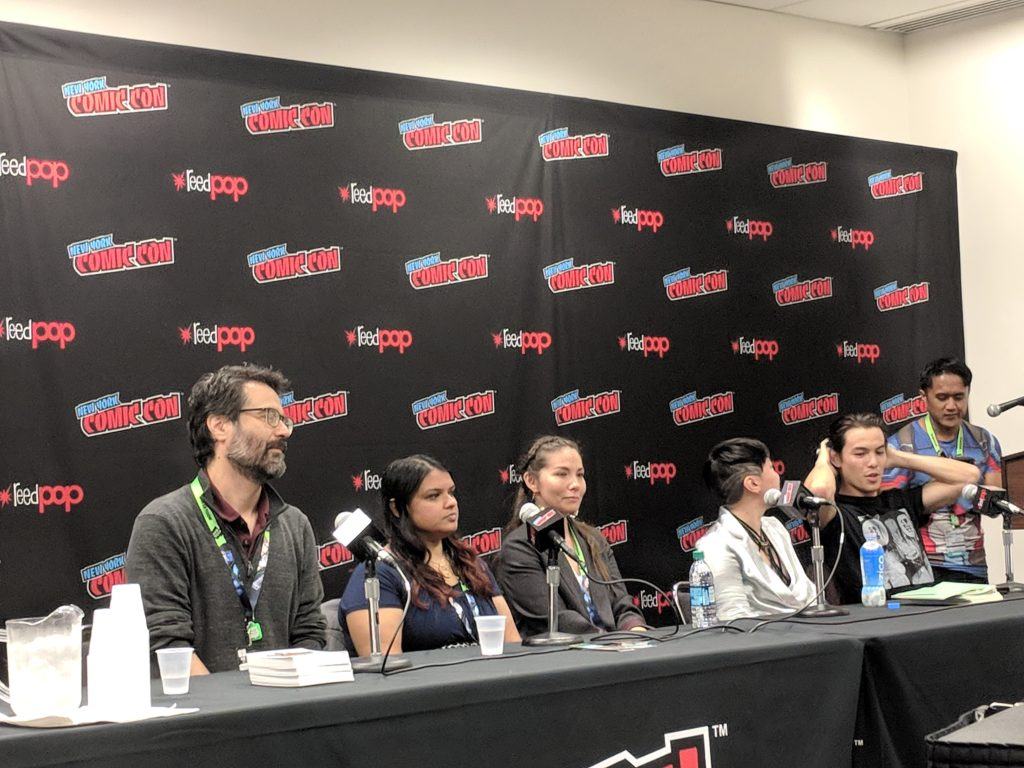 The panel ended with a quick conversation on how comics managed to adapt faster to representation than other forms of media. Pak pointed out that comics had a much lower threshold, needing to only convince three people to get approval to do the thing, whereas television and media were a significantly more expensive medium to work with. Liu talked about the necessity for structural diversity, and how it was important to have people of color in decision making positions. She briefly alluded to how she refused to have an animated version of Monstress, because she wanted a live action adaption so people could see flesh and blood. Chanani talked about her experience going to schools and seeing kids excited by the revelation that they too could create comics. Zhang closed out the formal discussion on the panel by talking about the current Kickstarter scene. She proudly proclaimed, “Screw the Giants…ignore the Giants,” since technology allowed creative types to get their work out into the world. She ended by reminded us that Kickstarter wasn’t a place to make profit, but rather a way to make our voices heard.

If there was a single moment that embodied the panel though, it was an something that happened about halfway through. A girl in Ms. Marvel cosplay ran up to the front of the room and was peering at the panel from behind a support column. Le invited her to sit in the reserve seating, and Ms. Marvel gleeful took her seat in the very front, eyes wide and enchanted by the panel. If that’s not all you ever wanted to see at New York Comic Con, then I don’t know what to tell you. That was my number one highlight for sure. 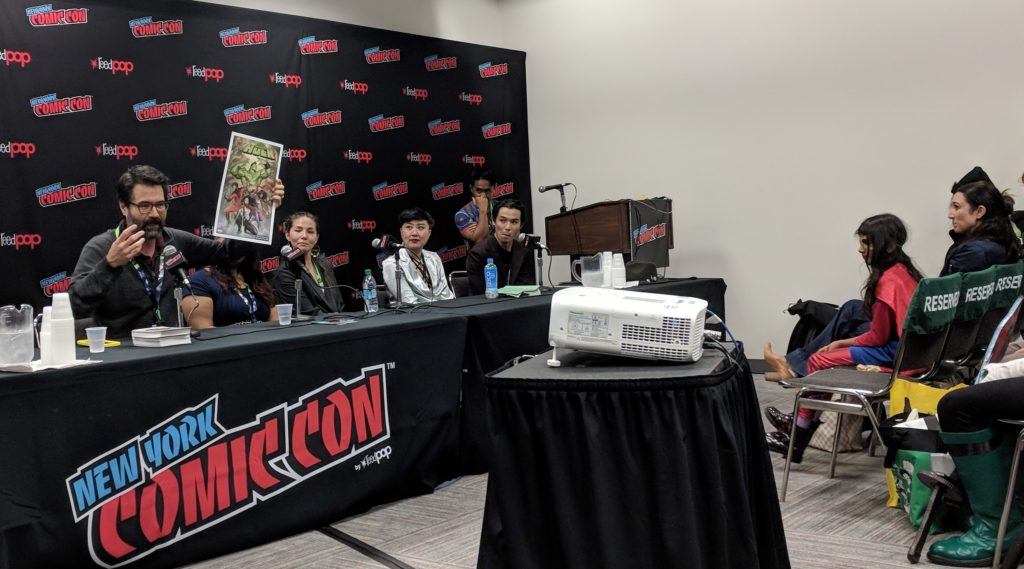 See all our other New York Comic Con coverage here.