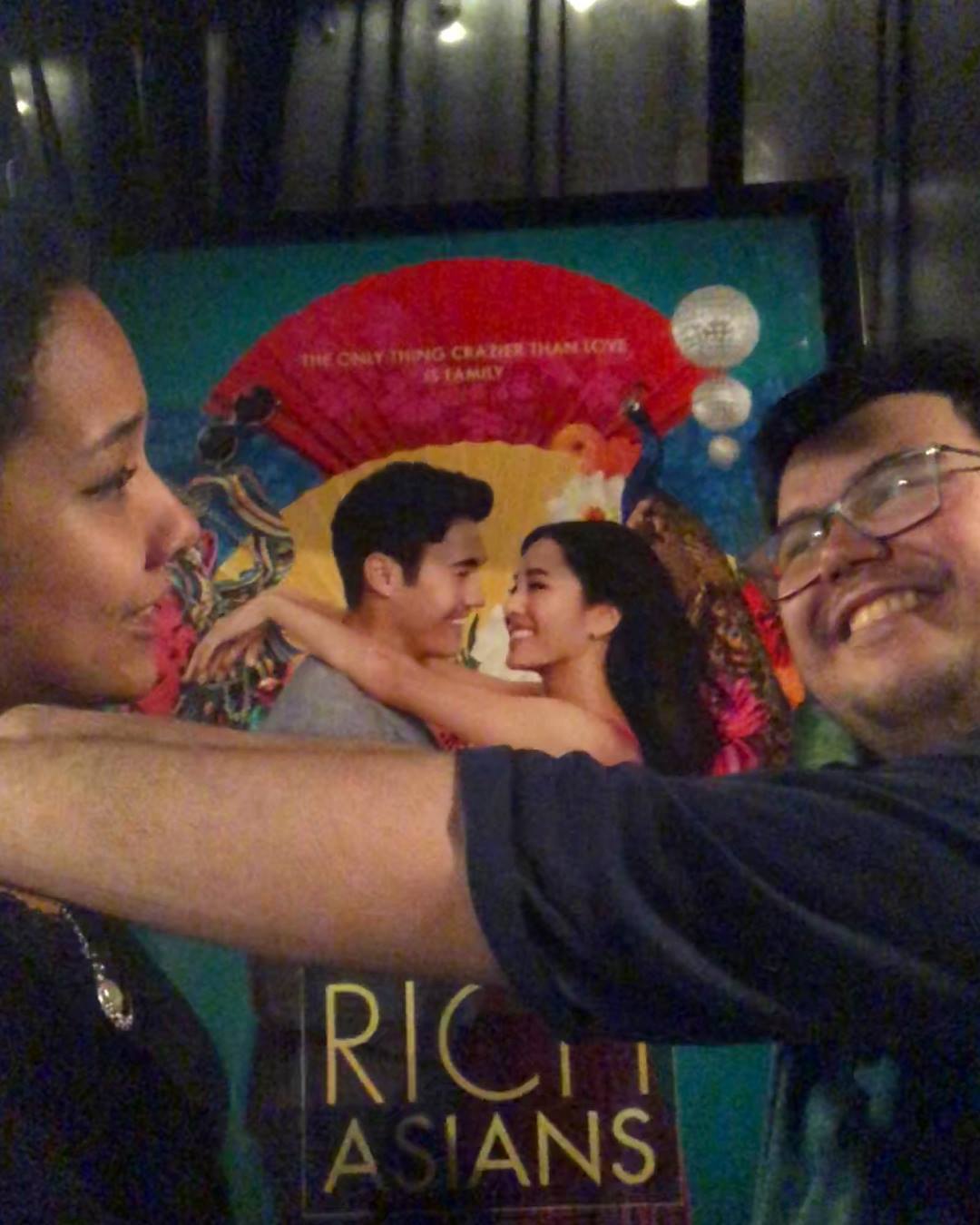 Lauren: I’m Asian American, but like most if not all of the media I consume, Crazy Rich Asians was never for me anymore than, say, any adaptation of Pride and Prejudice was for me. Yet the idea of someone else representing your experience accurately fascinates me, not in small part because it’s not something I ever expect to experience.

My mother is white and Vietnamese, my father is Black. They both grew up in the DMV where I live currently. It’s not exactly everybody’s go to romance (although Blasian romances certainly exist as I listed here), lest the background for a significant character. Like a lot of multiracial people I’ve always collected scraps of myself from books, movies, and shows and pasted them together into a collage that felt close enough.  Cassandra Cain spending years of her character history as white and some unidentified Asian ancestry, reading poet Staceyann Chin’s memoir The Other Side of Paradise, the moment Black, white, and Korean superhero Connor Hawke made me gasp just by existing. None of them were me but they were… enough. 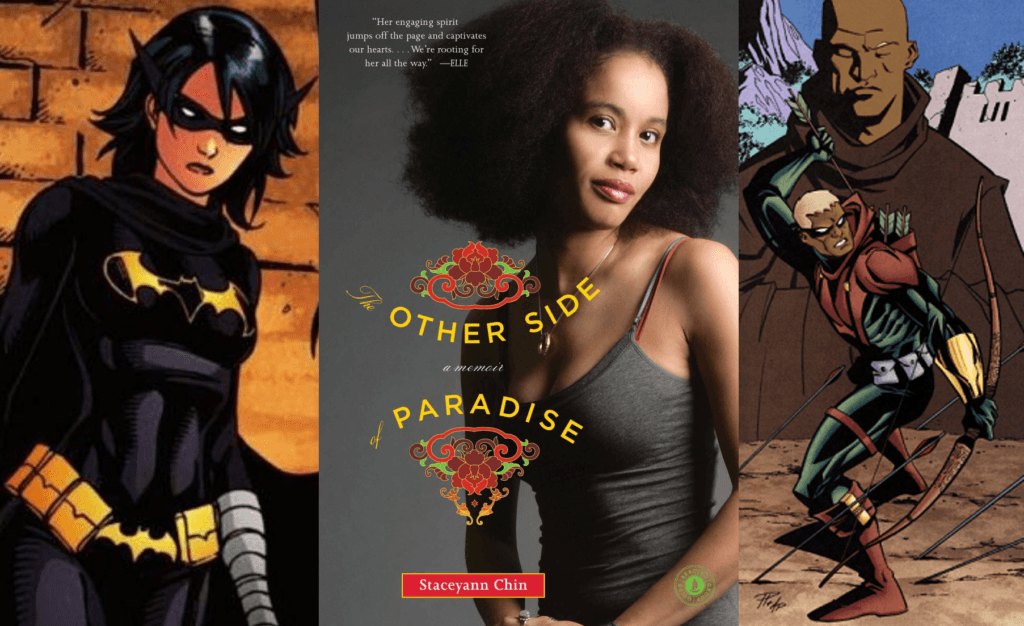 Mikkel: I grew up in the third richest county in the US (at the time) in a predominantly white neighborhood watching shows with white protagonists. Most of my friends and heroes were white and as a mixed kid, I once made the mistake of telling my Filipino mother I identified as white. It took a couple days of reflection before formulating an acceptable apology. It took a couple years to understand the gravity of what I said. I still think about it. It’s one of those mixed kids mistakes that you can’t help but mull over. I thought about it a lot when I flew back to Maryland to visit my family the week of August 12. It was a strangely good week for Asian American media for me. I watched Kim’s Convenience on the flight there, worldwide premiere of Crazy Rich Asians, and on the way back it was To All the Boys I’ve Loved Before. Although, none of these character were exactly like me either.

When I was in the DMV area, I reached out to my friend and fellow staff writer, Lauren, and asked if she wanted to see Crazy Rich Asians which she replied to with a YES. Through a quick google search, I found a theater in a section of DC I had never been to before: Union Market. We don’t purchase tickets ahead of time, thinking it’s Wednesday and are pleasantly surprised to see that the 7PM is booked. Even if it was opening night, I still wasn’t expecting it to be sold out. I was walk to the Market proper and see Lauren at a table. We catch up before walking into a strange amalgamation of restaurants. We around and exchange what shows we’re watching and our expectations of what the movie will be. I never expected Crazy Rich Asians to be a comprehensive display of the Asian American experience. I wanted it to be, I still want it to be. But Asian American is not a monolith. And it’s one thing to be of Asian descent born in American, and another thing entirely to be mixed.

Angelika’s Pop Up Theater has a decorated wall of old school movie posters. We get there as the 7PM showing lets out. We see people who kind of look like us. We make fun of all the white action heroes shirtless on the wall waiting for the masses to leave. When 8pm strikes, we walk over to the poster and one of our fellow movie goers is trying to put the stand in proper lighting. There’s a five minute shuffle working with a three overhead lights and an inconvenient curtain. They eventually find the one spot where selfies mostly work. Lauren and I sneak one before the movie starts, literally front and center. 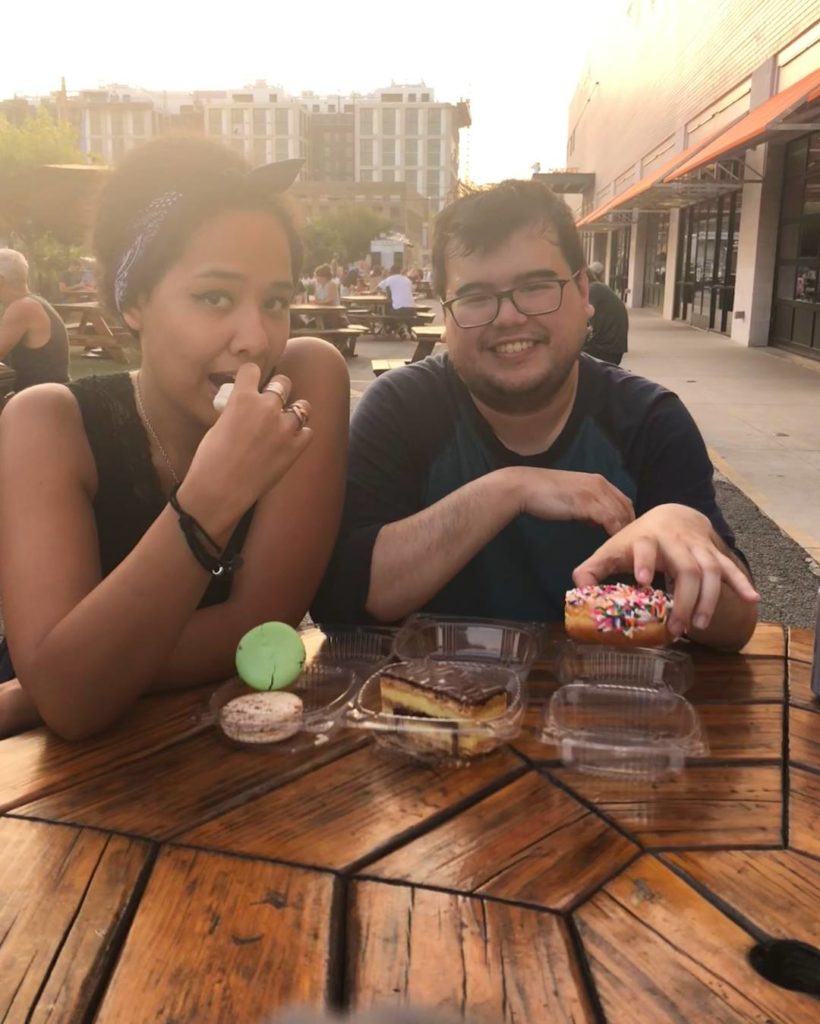 Lauren: It’s funny that I keep returning to Union Market with this hope of seeing myself, a place self-described as “the epicenter of culinary creativity in DC,” an intersection of cultures you can smell from the sidewalk. In fact, the last time I stepped into this particular theater it was to see Seoul Searching, a comedic movie that attempted to dive headfirst into this problem of the the Asian diaspora (specifically, the Korean diaspora) on a global scale and all the cultural misunderstandings and intersections that result. At the time I was faintly hopeful that the presence of Crystal Kay might mean a glimmer of myself on the screen, but that was short lived as it became apparent that Blackness makes for a better contrast or costume than character in an Asian story. Awkwafina’s viscerally uncomfortable mimicry of whatever Black stereotype she picked up from low budget sitcom underscored this point yet again in CRA; for Blackness to coexist with Asianess it must be in contrast, but never at peace in one body.

But then, as I recall the incredible first scene of sharp Eleanor Young shaming an entire racist hotel staff with one phone call or the brilliant and bold Rachel Chu embraced by her beloved Nick Young the way I have often only seen white couples embrace in film, I can’t help but feel a quiet pride. I see my grandmother teaching me to play dominoes in the mahjong scene, imagine how my mother might look at Rachel’s mother’s age racing across the world to comfort me. Not a belonging, no, but certainly a pride.

Mikkel: The movie itself is joyful. The first act is riddled with exposition, but it’s refreshing to see the Asian v. Asian American divide laid out in plain terms. The food market scene feels familiar. A couple of women a few rows back shout “why you’d bring the ring here” and we bust out laugh. Honestly, we’re probably the loudest ones and damnit, it felt good to fill the room with laughter and “oh my god” during the wedding and the mahjong game, the two marquis scenes of the movie by far. The victory of the movie was that it succeeded in telling a story that was uniquely Asian, even if it was only a particular type of Asian.

How do you feel after watching #CrazyRichAsians? All of the above? ? pic.twitter.com/x7bCVzbcH6

Lauren: Sometimes, to be honest, I’m at peace with the absence. When I wrote this list of seven Blasian characters, I wasn’t thinking about how many of these characters’ parents not only split but violently fractured, in some cases outright intentionally hurting each other. If there exists some grain of truth in the historically hyperbolic Tragic Mulatto stereotype, I suppose there must be some for the Tragic Blasian, too, and nuance certainly isn’t everyone’s forte.

But sometimes I get to be pleasantly surprised, too, either by comics like Tension or Agents of the Realm or Love! Love! Fighting! or by shows like Steven Universe or Into the Badlands coming physically or metaphorically close to my story, as if suddenly brushing the dust off a long lost mirror. To acknowledge the struggle between cultures— or to simply exist in universe.

Mikkel: There’s not a Filipino actors on TV at the moment. You got Vincent Rodriguez III on Crazy Ex-Girlfriend, and Manny Jacinto on The Good Place, and Nic Santo of Superstore (also in Crazy Rich Asians). Dante Basco still out there doing all the great voice acting word. Dave Bautista out there in the MCU, and Darren Criss in a guest starring role on The Flash that one time. I’m thankful that Fresh off the Boat is still airing and that casts are slowly becoming diverse, but it’s never fast enough. I had Vanessa Hudgens on Powerless for a single season and that was the closest thing to mixed representation that resembled my life that I ever had.

Lauren asks me who my Connor Hawke is, and my closest answer is Jon Kent a.k.a. Superboy. He fits all my check boxes: mixed kid with one parent who immigrated here and one parent from a military background. Some days he passes as white, some days he can’t pass as white. His ancestry is halfway across the universe and mine is half a continent and an ocean. He’s the hero I needed when I was growing up, and I think I’m making up for lost time at 27.

It’s something at least. I’ll take it. 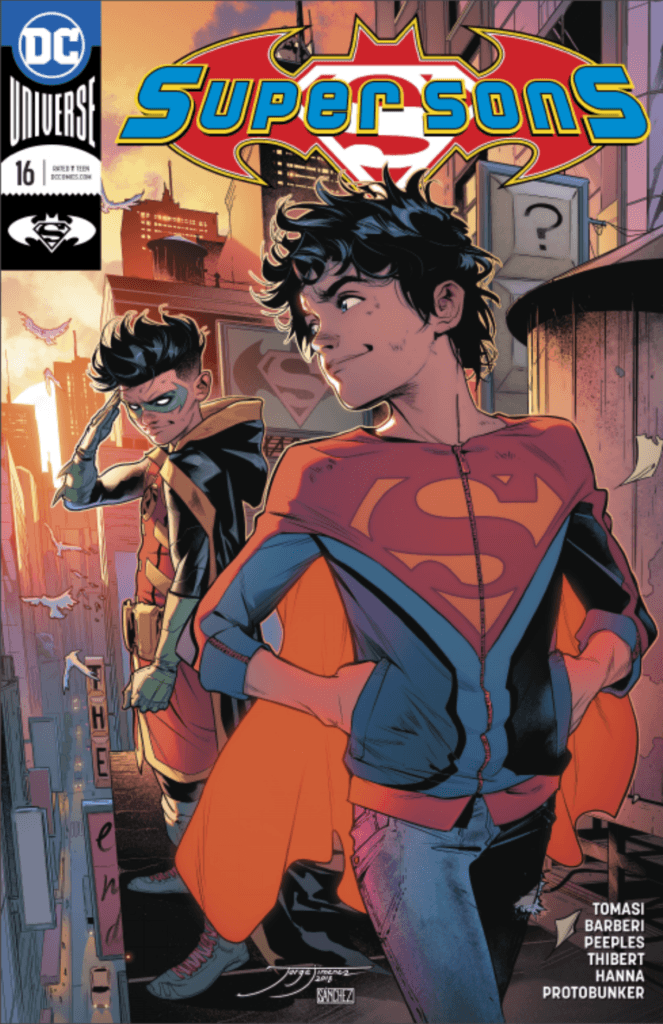