Man, I’ll be the first to rip on DC’s comic game recently. Geoff Johns left Green Lantern and the current run been making me feel some type of way (I got their fucking logo tat’d on my arm, man), which isn’t good at all. You let Oz tell it and that man going to go in about how useless Cyborg is (who’s getting a solo series soon).

Olivia Pope: I’m sorry, Mr. Cyborg. We already have someone who’s good with computers here. Cyborg: ….but is he black? #NerdLinkedIn

That man is vicious, and I won’t even get started on how Carrie feels reviewing Wonder Woman’s current run. That shit was all good a creative team ago, but now? Laaaaaaawd, let’s just say when that week comes we all avoid her digital desk when it’s time for her to drop that review. Don’t ask to borrow a stapler, or for a favor, or not a damn thing that day.

[divider type=”space_thin”]
With their whole Convergence event coming up, I could go on about the hole DC Comics is digging their way out of like a… hmmm, reverse archaeologist (looks at Jordan) …because of Marvel’s Secret War? Maaaaaan, you know Hickman goin’ dumb out on that shit. DC did start bouncing back on their movies with that list that got announced. The best looking one on the bill so far got to be that Jason Momoa Aquaman. Never thought I’d say “That Aquaman movie bout to be fiyaaaah” in this lifetime.

[Also, if the fact that Aquaman is Polynesian bothers you? You’re on some real fuck boy shit because answer me this: who the fuck do you know in your family or squad ever listed Aquaman as their favorite hero? Who was calling dibs on Aquaman back on the recess black top when y’all were playing superheroes in Elementary school? I will fucking wait…. …. … I thought so. Ain’t nobody give a good damn fuck about Aquaman. Homeboy been the superhero ass-up end of jokes for how long now? Peter David & Geoff Johns (more recently Geoff) made the dude a hot verse better but Jason Momoa bout to make homie a fucking hot song, so fuck outta here with that noise.]


[divider type=”space_thin”]
However, Marvel shut DC Comics movie lineup DOWN when they announced their own murderer’s row list of hits they have coming. Man, I don’t know what the offices over at DC was looking like but they knew they had to do something cause they getting their ass kicked in two fields. Now Marvel may be killing the game comic-wise (no doubt), and movie-wise it might be debatable (Dark Knight can only hold it down for so long).

You know what isn’t debatable tho? That TV culdesac. Ever since DC Comics and The CW got together (I’m not counting Smallville in this.. IDC, IDC, I-Don’t-Care) and was brain-storming ideas for shows while listening to Pusha T’s “Numbers on the Board,” it’s been a whole new ball game. They came out the room hot boxing and came up with Arrow and The Flash, two shows which changed the scope of the comic adaption to TV game. 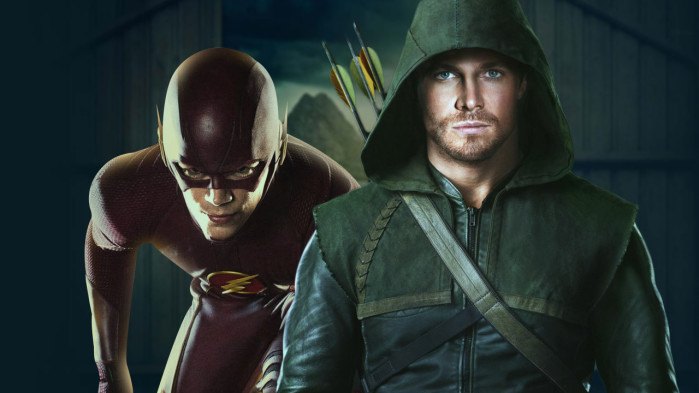 Arrow season two? That shit might be one of the best seasons for comic adaption in TV history. And season one of The Flash?! DON’T YOU GET ME STARTED ON HOW THEY DONE BROUGHT BACK THE SILVER AGE OF COMICS TO TV! Flash bringing obscure characters to the fucking forefront and making them look good (What up, Fire Storm! We see you, Gorilla Grodd!). These shows have had crossovers and we are a few episodes away from yet another. They’ve been doing so well that another spin-off show is coming for The CW, taking Ray Palmer (The A.T.O.M.) and Sarah Lance (Canary [deceased]) from Arrow, as well as Lenard Snart (Captain Cold) and Professor Stein (half of Firestorm) from The Flash. We have no idea what the name of the show is going to be, or even the premise, but we do know they added two more folks as well:

We got Ciara Rene as Hawkgirl (Earth 2 perhaps?) And Arthur Darvill as Rip Hunter (THE TIME GAWD)

Hawkgirl blows my fucking mind, first off. Then you throw in Rip Hunter?!?!? RIP HUNTER THE TIME MASTER?!?! And you got a dude from Dr. Who as the actor? I see what you did there, CW.

Hawkgirl is more of a household name than Rip thanks to her time on the Justice League animated series. Seeing her in a live action series tho? If I were a betting person I’d say we’re going to be seeing the Justice Society being set up in this series. We know there was supposed to be an Hourman pilot that was supposedly in the works for The CW, which is all up in the air now. Hourman is a legacy character from the Justice Society, so I wouldn’t be surprised to see him show up here as well.

We still don’t have any information as to the name of the show, so this is all speculation, but whatever The CW is cooking up this time we got to believe they’re good for it. If Arrow was the prototype and The Flash is Mach-1, this spin-off will definitely have me tuning in to see what they do with Mach-2.