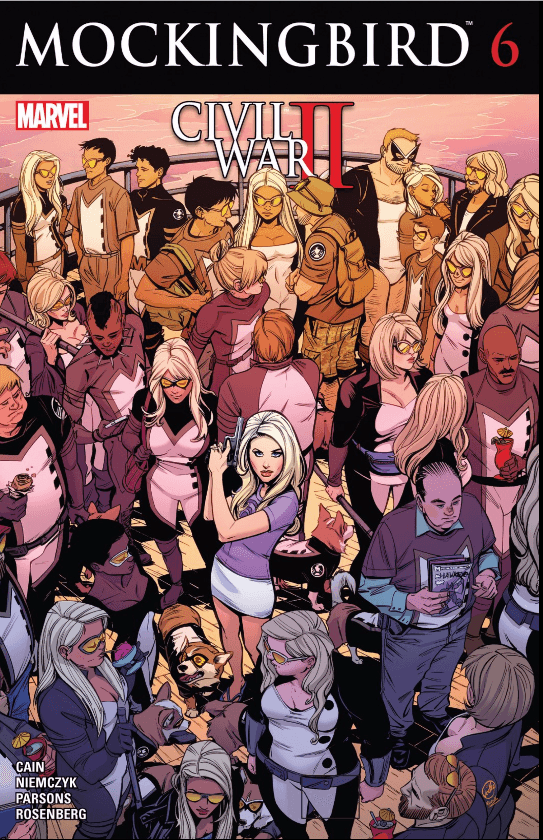 In this issue, our favorite superspy joins the Civil War II fray. She is lured to a cruise by the promise of clues to help her save her ex-husband, Clint/Hawkeye, from his just punishment in the murder of The Hulk (see Civil War II Issue #2 and Issue #3). She plays it cool, just another job, but there are points where the facade cracks and you can see the confusing impact of the drama. 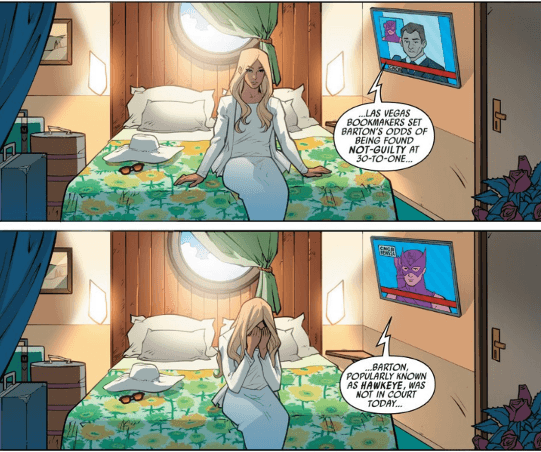 The comic curves through its usual pattern, with hints of future mysteries being dropped along the way. Bobbi in this issue has completely taken on the James Bond style — casinos and disguises and sex — but the casino is actually a D&D game, the disguises are horse-heads, and the sex is with Lancelot Hunter (see Mockingbird #2 for his intro). How did Hunter get here? Corgis. (Yay, the Corgis are back!)

[divider type=”space_thin”]
Seriously, he’s following her. They are super spies. That’s what they do.

The art holds its own in this issue, and there are even people of color in the backgrounds in the crowd scenes, so points to the artists for that. Still none with speaking roles, but maybe we’re getting there. Eventually.

My complaint with this issue is the setting: the Nerd Cruise. It all felt like a bit of a industry in-joke. Reading, I had the feeling that every face was supposed to be someone in particular, and that the background signs, usually witty in this comic, fell flat because I didn’t get the reference. There is a particular running sight gag about “Paul and Storm” in which the dude named Storm is most definitively NOT STORM. It’s cool, it just feels like I missed half the comic.

In the end, what started as a “get the dirt on Hawkeye” mission turns into a much bigger mystery. Just as the boat sails into the Bermuda Triangle. The set up is clear, now let’s watch while Bobbi goes full Miss Marple and cracks this one.

Want to know what happened before? Read our other Mockingbird reviews and be ready for what’s next.