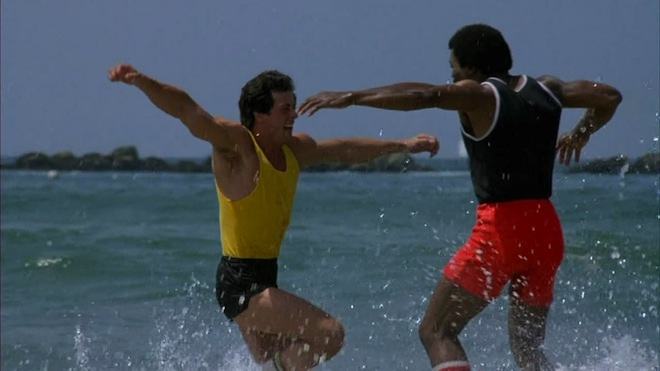 Omar: I was talking about the Creed trailer with my girlfriend Thuli and she was interested in what she saw but had never seen any of the Rocky movies (she’s from overseas so she gets a pass on this one).

Thuli: Okay, firstly, South Africans everywhere are gonna be mad he tried to put that weight on them. To clarify, my lack of interest in the Rocky franchise existed irrespective of geographical factors. None the less, after I watched Omar watch the new Creed trailer for the 7th time in a row, and cry for the 7th time in a row, I knew I had to give Rocky a chance. So armed with Netflix and a free afternoon, I set about my education. At this point I would be remiss if I didn’t confess how thoroughly impressed I was by these films — in a single afternoon I’d made my way through the first two movies, and Rocky was making his way to first in my heart (Hashtag I love him. Hashtag Rocky is the most underrated fictional character of all time. Hashtag can we talk about how amazing Sly is? I realize I might be late to this party, but Hashtag I’m just saying)

Omar: I made a point to be home when Thuli was going to watch Rocky III because it’s my favorite of the series — I get mad hype watching Apollo step in and bring Rocky’s hunger back. When he starts hookin’ off on him and yells in frustration? “What’s the matter with you, man?! There is no tomorrow! There is no tomorrow, Rock! There is no tomorrow!” Ahhh, it doesn’t get more hype than that right there. Little by little Rocky earns his confidence back and adapts to the style and technique that Apollo and Duke teach him, and we all know the training is complete when Rocky is finally able to beat Apollo in their sprint down the beach. They’re both so happy the training has paid off that they express it by hugging each other in celebration.

I love this scene, and as it ends, I noted aloud “Yeaaaaah, you could do that back in the day in the ocean with ya mans and dem.” This is an iconic moment of friendship, but in 2015 you’d be hard pressed to find a scene like that happening in movies or real life. The scope of masculinity between / / The beginning of time -2015 has gone through a change where such a display of affection is automatically deemed unmasculine, feminine, or labeled as gay.

Thuli: And well, there is the rub, isn’t it: the ubiquity of homophobia, because if we get down to it, the way society is set up, these days dudes are so scared of being labeled gay that they can’t even go for a good ol’ frolic in the waves with their ride or die. It’s even more jarring when you think about the reverse on screen and in life, two women or girlfriends (look even that — I can call my female friends my girlfriends, no issue, but I have never heard any guy call his male friends his boyfriends, but I digress) hugging on each other, frolicking in a meadow, arms wrapped around one another, holding hands, that’s not an uncommon sight.

People don’t see that and think… ooh, they are obviously lovers, and I am not okay with that. You put two men in the same scenario though and it’s a different story. As someone whose primary love language is touch, I watched that Rocky III training montage with those rippling muscles and cut-off tanks, the passion, the sweat, the determination, the fire, the friendship, the love, and yes, all of the hugs, and I was nostalgic for a time I hadn’t really known. I thought to myself, it must suck to live in a world where you feel you cannot do that with your squad.

Omar: Apollo and Rock kep– wait, “rippling muscles”? Guess I’ll be hittin’ the push-ups after we finish this. But back to what you were saying — Apollo and Rocky kept it a ‘hunned with the secureness of their own sexuality, like “we’re out here racing on the beach trying to get in shape for this match, so what? Yeah, my shorts mad short and I cut the tank off so you can see the washboard abs that are now washer-and-dryer abs. And? It’s fucking hot out here man, what’s the problem?”


[divider type=”space_thin”]
They didn’t have to “no homo” or “pause” after displaying how much they cared for one another. Plus, look at their outfits, who the fuck gonna test them? Y’all were rocking pink Timbs ’cause Cam said so, but a cut-off tank is across the line? Being comfortable as you sprint to get in shape for a boxing match is crossing the line?

Thuli: As we are writing this, Omar, who lives in the internet, brought to my attention the MasculinitySoFragile hashtag:

#MasculinitySoFragile Guys have to say “no homo” when showing affection to another guy, which is like saying “no Oedipus” when u hug ur mom.

#MasculinitySoFragile men think kissing their son will turn them gay.

I thought it was interesting that some of the tweets spoke to some of what we have been in conversation about since our big Rocky day in. Now look, I am by no means here to hold Rocky up as the pinnacle of masculinity, trust, but I will say I sat down expecting to see a series of mediocre 80’s films about boxing and was pleasantly surprised to find a complex and compassionate character in a pretty riveting story (I don’t count IV here, but it is carried by the law of averages). How refreshing to see this guy, soft spoken, sweet, nerdy, with all these ridiculously great dad jokes in high-waisted super tight pants, this fighter who is gentle, tender, and kind, unabashed about his feelings and unafraid to be affectionate to those he loves; not only to his beloved Adrian (Adriiaaaaaan!) but his mentors, friends, and son. And what a joy it was to watch him grow right before my eyes over the span of 30 years.