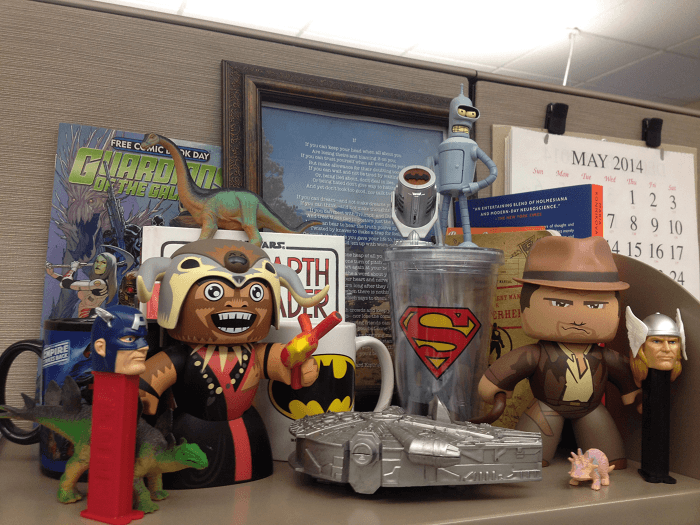 This is the second in our three-part series The Life and Times of Blerds in the Workplace. You can back up to read Part I: What Kind of Blerd Are You at Work? Or read ahead to Part III: Being an Open Blerd.

As Jordan alluded to, navigating your professional day job is tricky enough if you are a Person of Color, let alone if you geek hard in the paint. So let’s say you just got that new gig. Upgraded the tax bracket. Health benefits on fleek. Now you got your own professional desk with a laminate finish and working drawer with handles and shit. You gotta customize this thing like Fast and Furious and make a 10 second car out of this bastard right away, right?

Naw, b. Pump your metaphorical breaks. I believe in being Black and unapologetic, but I also believe in 90/10 dental coverage and having disposable income to buy special editions of video game releases with the DLC included. So let’s do the math on outfitting your desk or cubicle without getting to know HR on a first name basis before your 90 days hits.

[icon_check] You should: Outfit your desk with popular sci-fi and fantasy images, as those are easily relatable.

You learn a lot about a person by how they respond to a Gandolf – “You Shall Not Pass” 5 x 7 color print you got pinned to the corkboard hanging over your workspace. The nerd shaming is low on that end because they didn’t make a trillion dollars for Lord of the Rings off just dudes in their mom’s basement with a headset on 24 hours a day. Stuff from comic book movies is easy too, and what’s best about those are that the conversations are normally limited for passerby’s.

[divider type=”space_thin”]
If you got a picture of Hugh Jackman flashing the adamantium, most folks are gonna say if they liked the movie or not. It’s a bonus if someone sees that and it leads them to calling bullshit on Kitty Pryde having time travel powers in Days of Future Past. You just found a new nerdy friend.  Comic books themselves are a bit trickier, but we’ll get to that later.

[icon_x] You shouldn’t: Have video game related stuff up anywhere.

It’s possible that you like people more than me (like an 80% chance actually), but having a recognizable video game character displayed at your desk means you might find yourself in some annoying conversations you didn’t plan to have with your bagel and coffee. One minute you’re positioning your Solid Snake figurine next to your computer and the next, a mother of three wants to talk to you about how violent video games are and how they are corrupting our kids (don’t ask who she voted for though, or her thoughts on the NRA). You thought that poster of Samus Aran was cool? Yeah, wait till some condescending VP is standing over your desk asking why you’re grown ass is wasting time playing video games. Which then, you HAVE TO find out his children’s names, see if his son or daughter plays Call of Duty, friend them over PSN, and then terrorize them for a week straight in multiplayer yelling NOOB and squatting over them after every time you kill them. I’m really just here to save you some time, fam. You do have a new job after all.

[divider type=”space_thin”]
You Could: Have Comic Book stuff at your desk

There is some tricky ground to navigate here though. Batman, yeah, fuck it everybody knows Batman, especially civilians. Batman says you’re into comic books, or at least into Christopher Nolan films, but what you’re really into is a rich white dude deciding what’s best for his city, even if it means beating the hell out of people. And chances are that at your professional job, you won’t get too much pushback for that. Captain America? Come on, that’s even better than saying you voted for Romney. Because Rogers >>> any GOP hopeful in the last couple of decades at least. But Captain America, Sam Wilson edition? Ehhhhh.

[divider type=”space_thin”]
[quote_right]”Batman says you’re into comic books, or at least into Christopher Nolan films, but what you’re really into is a rich white dude deciding what’s best for his city, even if it means beating the hell out of people.”[/quote_right]I mean, you can do that, but are you really trying to spend 20 minutes explaining  to Theodore from accounting how Steve got drained of his super serum and is actually like 93 years old (but still spry) and  Falcon is now Captain America? Don’t you have enough “why are you mad that Captain America is Black” conversations with people that actually read comics? Is your idea of a good time being late with your TPS reports trying to clarify that Chris Hemsworth won’t one day “transform” into a woman in the Avengers flicks because you got that Thor #1 propped up behind the cupholder? And what are you doing putting up White women superheroes at your desk anyway? Most of these cats didn’t like that you got the job in the first place, now you scheming on their women too? I don’t know man, the workplace is MURDA. Leave the golden lasso at the crib, bruh. You can put up Storm, Black Panther (depending on if you’re at a non-profit or not), and maybe Luke Cage if you heard someone mention the Daredevil series coming to Netflix. Otherwise, why give yourself the hassle? Unless of course, you got that Mighty Avengers #2 variant or the Shaft #2 variant with the Hands Up Don’t Shoot cover. Cuz sometimes muthafuckas need to know. After your probation period, anyway. Yeah, a lot of button-pushing bastards gonna be compelled to make Groot get loose one time, but this is really for you. So much drama in the POE (Place of Employment) it’s kind of hard being a newly hired POC. Micro-aggressions, work politics, maybe there’s a lobby where they play FOX news… all these things could keep you off balance. But dancing Baby Groot was made for those moments, yo. Give the homie room and let him carry you to quittin’ time.

Read on to Part III.