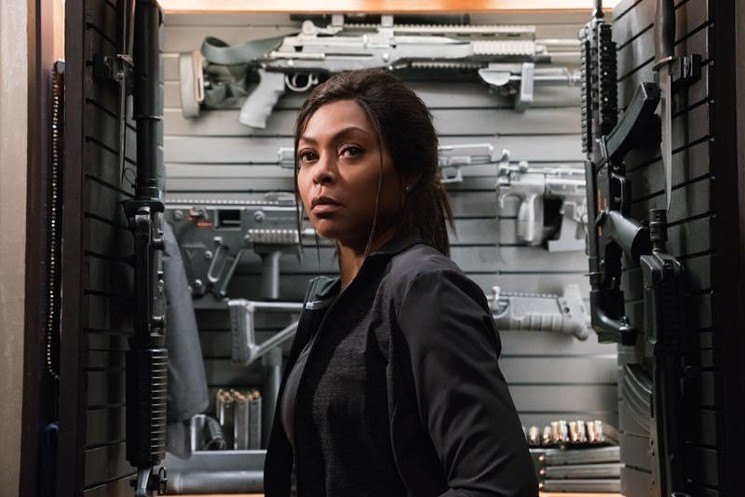 “I’m rooting for everybody Black.”

It’s hard to articulate all the ways in which Issa Rae’s now infamous quote both summarized and galvanized the sentiments of Black folks when she calmly delivered those words during the 2017 Emmy Awards. Black people do this, often to our dying breath. Whether it be with TV awards or Black quarterbacks in the playoffs, seeing a Black person compete in a realm that is not necessarily populated by Black people can often be the tiebreaker when there’s no previous vested interest. It is the very American adage (ironically) of everyone loves an underdog story. But with Black people because of how often we are the underdog.

While I do believe that Issa’s quote is not qualified in its intent, that everybody does, in fact, mean everybody, what’s also important to note is where she said it. At an awards show. Where TV shows and movies had already been recognized for their quality. And from that pool, she wanted everybody Black to win. It’s an important distinction, as it flies in the face of assuming well-intentioned Black art equates to Black art excellence. So then the question is, what do we do with bad Black art? How do we manage it and acknowledge it? And ultimately, what is our commitment to it?

This is, most recently, of course, accelerated by the release of Proud Mary, the Taraji P. Henson spec-ops type action movie that released last week. When the trailer and art for the movie dropped last year, there was a great deal of excitement for an abundance of reasons.

First and foremost, Henson is very easy to root for. Often unfiltered, authentic and rooted, Taraji feels like one of us that had the talent and limited opportunity, but busted her ass and made it. She’s a legit premier talent on TV and an Academy Award Nominee. So if she’s doing something, we’re going to show up and support because if Taraji is winning, we all feel like we’re winning.

Secondly, there’s not a whole lot of predominantly Black action films out there that get major releases. And definitely not with a woman as the protagonist who looks like a complete badass. After getting about 7 different Black Widow knock-off movies with a white woman killing everyone (because we never got a Black Widow movie itself), then yes, Black people are excited for the possibility of seeing a Black woman in that type of role.

And lastly, the promotion was unapologetically Black. The trailer, the art, and design are all gorgeous and while there wasn’t much ongoing marketing to pull from, the initial images were easy to feast upon. 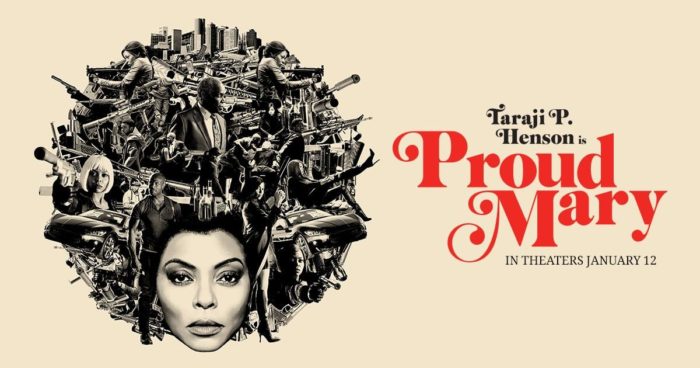 All of that explains why we want it to be good. But does that make it good? In this case, no. Sadly, no. With the naked eye, you could say that reviews on Proud Mary are split. The critics are tearing it down, but there are plenty of fans championing the movie, qualified as that praise may be. Of course, one’s love or disdain for any kind of media is often a subjective venture. If you don’t have a vested interest in providing a balanced critique *cough, like being a reporting pop culture site, cough* then you are going to most likely bring your preferences and yes, prejudices into it. You might honestly believe that Proud Mary is a good film. Or you might feel that Proud Mary is a film you wish desperately to be good. By the objective critique of the movie, all indications would be that it’s not very good. So, I would guess the question is, why does that matter?

Proud Mary brings into focus the question we tepidly approach: What exactly do we do with art that may or may not rise to excellence when Black people are behind it. It is a loaded scenario for sure. If a movie filled with predominantly Black people comes out to much hype and is terrible, a simple dismissal of the film isn’t the resolution. If Black art fails, we don’t have the luxury to question the production alone. Was it sabotaged? Was it unfairly marketed? Did it tank because it wasn’t catered enough to the white gaze? Is there a penalty to Black authenticity? All of this may sound like conspiracy when rattled off in this way, but there are concrete reasons for the skepticism. We’ve seen these things happen before, so we are reluctant to trust a system of fair review for things we either do enjoy, or really want to enjoy.

But, if we consider the fact that, it may not be good. Whether it be Proud Mary or Gabrielle Union’s upcoming Breaking In, if it somehow disappoints, well, then what is our responsibility then? What is omnipresent is what we collectively fear as a worst-case scenario. There is the possibility that if Proud Mary is bad, the action film debut that is produced by and stars our beloved Taraji, that the possibility may never come up for her (or others like her) again. We drown in a sea of White mediocrity every day (how many NCIS shows are there now?) but are all too aware how easily Black stars and their ventures get benched if they don’t succeed.

It is a tangible fear. If Armie Hammer stars in a terrible movie, Armie will have at least three more films the following summer. If Taraji gets a taste of being a leading woman in a movie (two in the last two years), none of us want to see her go backward from that. 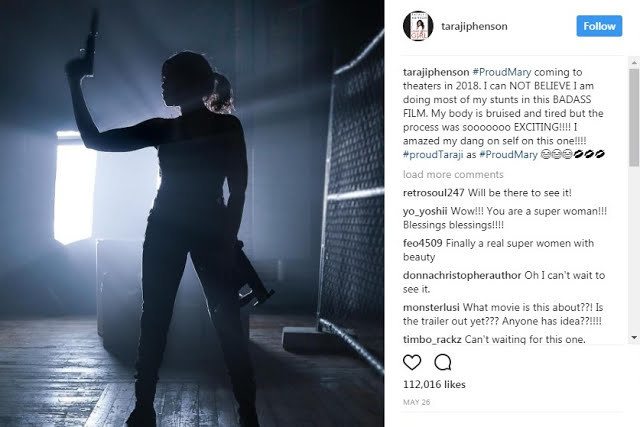 This ties into half a hundred other questions about how we treat Black artists compared to White artists and what the standard of quality should be. As I watched the conversations about Proud Mary rage on, the most frequent defense of the film’s shortcomings typically came in the form of comparing it to similarly mediocre-to-bad White films. If the argument were “Taraji should get another shot at making a better version of Proud Mary either through a sequel or another vehicle,” then that argument would hold weight. But it’s hard to justify a below average film by comparing it to another below average film that exists in the world. For instance, I think that Red Sparrow movie with Jennifer Lawrence looks bad and pretty unoriginal. And yet, I saw a lot of people saying, well, if they can keep making that movie (again), then we can have Proud Mary. I mean, sure. But that doesn’t make Proud Mary good…that just makes two bad films.

This is, of course, is part of a bigger phenomenon. Black people are fiercely protective of their art and artists because we know how easily they can be degraded and nullified. We’ve watched what white media consumption can do to a Black star that has either served their purpose, didn’t kneel to their “good negro” ideals, or ruffled their sensibilities outright. Fading Black stars aren’t just forgotten. They are often buried. And because we’ve seen that play out so often, we have made it more difficult to critique some media in a social space. Some of the best examples of this have happened on Netflix, with the releases of The Get Down and Luke Cage.

Count me as one of the early adopters of really digging The Get Down. I was thirsty for a POC led period piece that wasn’t centered around slavery. And so, I was on board for all of it, which means that I was willing to give it all the rope I could manage. And while I still think a couple of episodes from the first season (and by God, just the first season) are still pretty good, the show is almost hard to watch at times. Once I had a brief reprieve from being starved for that specific kind of content, I was lot more objective in admitting the many flaws the show had. Still, I saw myself defending it often against people that didn’t embrace it. This is a show about the birth of hip-hop that’s filled with Black and Brown people, what the hell is wrong with you?! We joke about not wanting to get dragged for saying something bad about a thing that Black people love, but it’s a real thing. There is a sense of betrayal, that we are cracking some foundational defense if we aren’t all in agreement that this very Black thing is the very best thing. We saw this in Luke Cage too, where there are still plenty of people that claim it’s the best of the Marvel Netflix shows. Which, seems laughable to me as some of the acting and derailed third act alone take it out of any “great” qualification for me. But, I did enjoy Luke Cage about as much as any of its rivals. And I wanted it to win. I needed it to win. And it did win enough when it was all said and done. Even if it wasn’t the big prize.

Essentially, it comes down to what do we, as Black consumers that want to support Black artists, owe those artists if the work doesn’t hit the level we want? I don’t believe in any way, shape, or form that Black art has to be exceptional to warrant support. I think work that doesn’t rise to some profound level should be supported, regardless (provided it isn’t straight up damaging or harmful). I really wish that Proud Mary crushed at the box office, even if I don’t think it is a good film (it didn’t by the way). But the “why” is worth investigating.

The film was shown on the second lowest number of theaters of any that grossed in the top ten this past weekend. Much was made about the disparate marketing for the film before its release. It seemed that Sony had given up on the film before it was ever birthed. But I would venture to say that it may have never had a shot at being a great film. With an estimated production budget of $14M, it’s hard to imagine putting it in the same ballpark as other big name action films. The Commuter, which opened on the same weekend had a budget of at least $30M and that looks like a younger sibling to your average Liam Neeson not-as-smart-as-it-pretends-to-be action film. But we know if Neeson wants another action franchise he’ll have it without trying. I know part of the impetus for trying to boost Proud Mary is hoping that Taraji gets the same treatment.