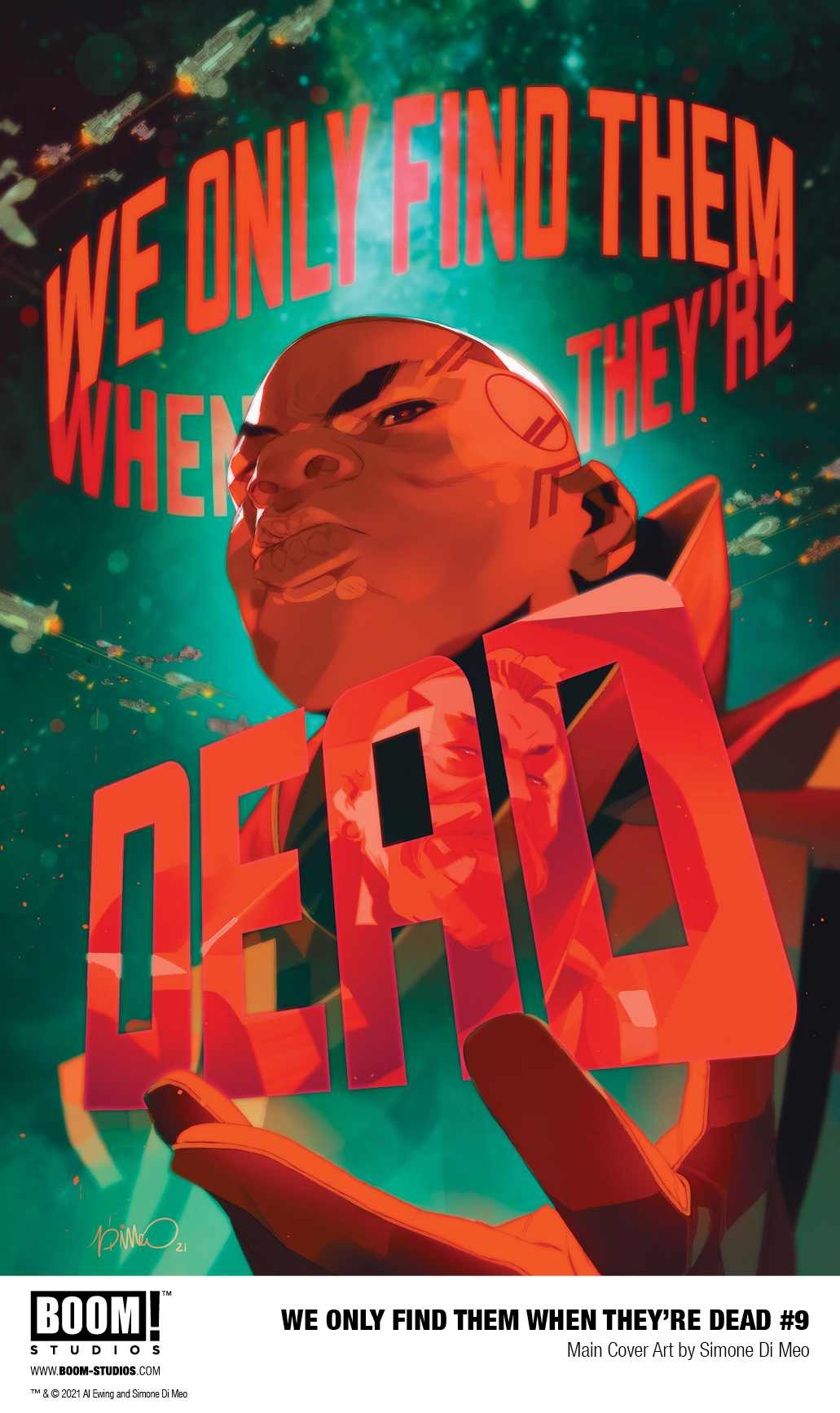 We here at Black Nerd Problems are ecstatic that BOOM! Studios is giving us the opportunity to share the first look at WE ONLY FIND THEM WHEN THEY’RE DEAD #9! Set in a universe that revolves around mining the corpses of dead gods and a conflict that threatens to tear apart the galaxy, from Al Ewing (Immortal Hulk) and Simone Di Meo (Mighty Morphin Power Rangers), with color assistance by Mariasara Miotti and letters by AndWorld Design. Available in stores October 27, 2021.

How far are the Worshippers willing to go for the cause? Bristow has always done whatever is needed to rise through the ranks of the security services, but now he’ll make his move and reveal his true ambition. And Bristow’s secret meeting with a shadowy devotee may alter Jason and Chen’s fates forever…

WE ONLY FIND THEM WHEN THEY’RE DEAD is the newest release from BOOM! Studios’ eponymous imprint, home to critically acclaimed original series, including BRZRKR by Keanu Reeves, Matt Kindt, and Ron Garney; Seven Secrets by Tom Taylor and Daniele Di Nicuolo; Something is Killing the Children by James Tynion IV and Werther Dell’Edera; Once & Future by Kieron Gillen and Dan Mora; The Many Deaths of Laila Starr by Ram V and Filipe Andrade; and Eve by Victor LaValle and Jo Mi-Gyeong. The imprint also publishes popular licensed properties, including Dune: House Atreides from Brian Herbert, Kevin J. Anderson, and Dev Pramanik; Mighty Morphin and Power Rangers from Ryan Parrott, Marco Renna, and Francesco Mortarino; and Magic from Jed McKay and Ig Guara.

Print copies of WE ONLY FIND THEM WHEN THEY’RE DEAD #9 will be available on October 27, 2021 exclusively at local comic book shops (use comicshoplocator.com to find the one nearest you) or at the BOOM! Studios webstore. Digital copies can be purchased from content providers like comiXology, iBooks, Google Play, and Kindle. WE ONLY FIND THEM WHEN THEY’RE DEAD VOL 1 is available now wherever books are sold.

For continuing news on WE ONLY FIND THEM WHEN THEY’RE DEAD and more from BOOM! Studios, stay tuned to www.boom-studios.com and follow @boomstudios on Twitter.